What You Definitely Must Know About Glyphosate (RoundUp) 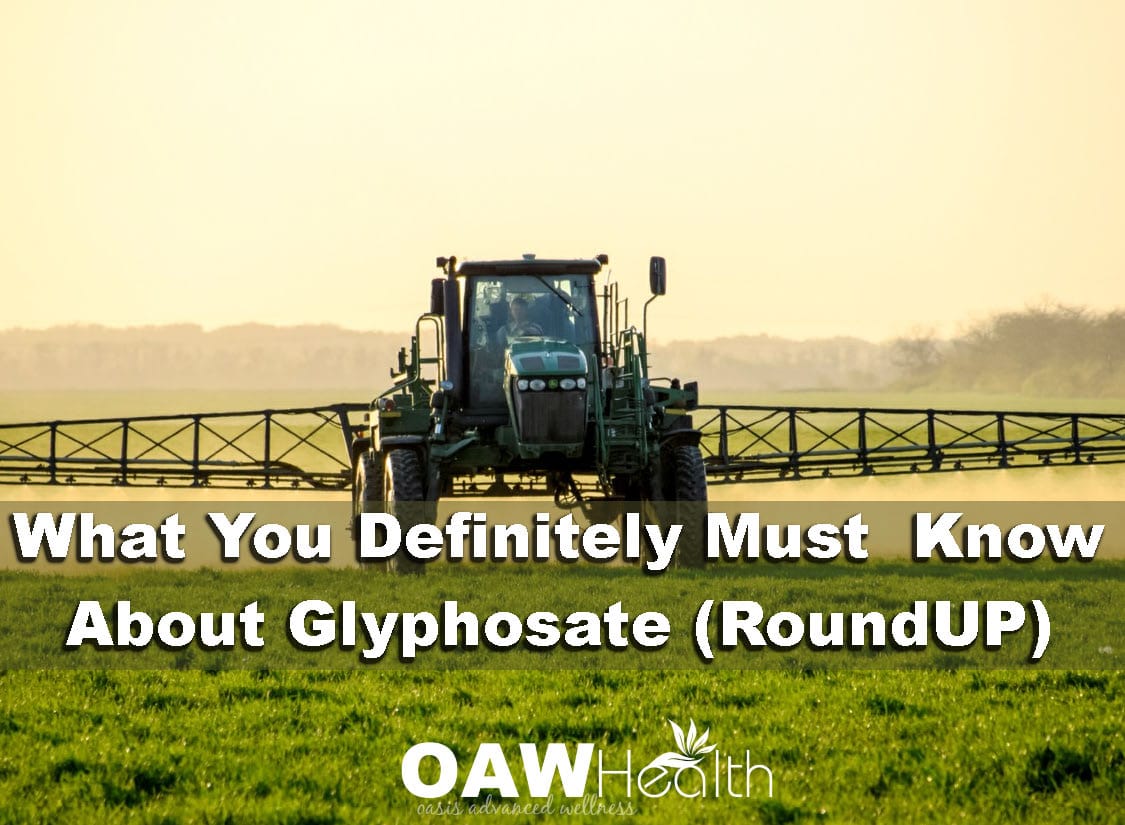 Anthony Samsel, a chemist, and co-author of the paper, Glyphosate’s Suppression of Cytochrome P450 Enzymes and Amino Acid Biosynthesis by the Gut Microbiome: Pathways to Modern Diseases, discusses the effects of glyphosate (the active chemical ingredient in RoundUp, a registered trademark of Monsanto) which is in the majority of our food, with Zen Honeycutt of Moms Across America. The videos (bottom of page) cover Autism, Diabetes, Asthma, COPD, and more. This stunning new information will alter how you look at the food you eat and its health implications forever. I have always been amazed at how much havoc glyphosate can wreck on the body, but Mr. Samsel really gets down to the nuts and bolts of how and why glyphosate can be implemented in many, many health concerns.

Glyphosate is the active chemical ingredient in Roundup, made by and a registered trademark of Monsanto. It is the most widely used herbicide in the world. Hundreds of millions of pounds of this chemical are used each year not only on crops but on parks, schoolyards, and city landscaping. It is sprayed on the soil before planting crops that are raised in a no-till non-organic production system. It is also used as a desiccant and applied pre-harvest on a wide number of crops destined for the food chain. Glyphosate-based herbicides are sprayed directly on GMO plants which have been genetically engineered to withstand the herbicide. Animals and people that consume these crops that have absorbed glyphosate either through the soil or from being repeatedly sprayed with glyphosate are subjected to numerous health concerns.

Between the years of 199 -2011, the widespread use of Roundup Ready GMO crops actually increased herbicide use in the U.S. by 527 million pounds. This happened even though Monsanto claimed its GMO crops would reduce pesticide and herbicide use.

Abstract: Glyphosate, the active ingredient in Roundup®, is the most popular herbicide used worldwide. The industry asserts it is minimally toxic to humans, but here we argue otherwise. Residues are found in the main foods of the Western diet, comprised primarily of sugar, corn, soy, and wheat. Glyphosate’s inhibition of cytochrome P450 (CYP) enzymes is an overlooked component of its toxicity to mammals. CYP enzymes play crucial roles in biology, one of which is to detoxify xenobiotics. Thus, glyphosate enhances the damaging effects of other foodborne chemical residues and environmental toxins. Negative impact on the body is insidious and manifests slowly over time as inflammation damages cellular systems throughout the body. Here, we show how interference with CYP enzymes acts synergistically with disruption of the biosynthesis of aromatic amino acids by gut bacteria, as well as impairment in serum sulfate transport. Consequences are most of the diseases and conditions associated with a Western diet, which include gastrointestinal disorders, obesity, diabetes, heart disease, depression, autism, infertility, cancer, and Alzheimer’s disease. We explain the documented effects of glyphosate and its ability to induce disease, and we show that glyphosate is the “textbook example” of exogenous semiotic entropy: the disruption of homeostasis by environmental toxins.

What Can We Do?

First of all please notice Mr. Samsel’s last words in Part I Video: “We are creating this…” According to Zen Honeycutt of Moms Across America: “By feeding our children 31.5 million GMO SCHOOL MEALS a DAY, even more hospital and senior center meals, by eating the 160 foods that are contaminated with glyphosate, by eating the 80% of our fast, cheap, easy and tasty food that is GMO and therefore heavily doused in glyphosate, and contaminated at levels thousands of times higher than what has been shown to cause breast cancer.” WE not only creating this but ALLOWING it to happen!

More to the story: The EPA recently raised the allowable levels of glyphosate despite thousands of comments against this pandering to big chemical companies!  And for the most part, we have accepted this and are allowing it.  All the runs, walks, marches and videos against Monsanto are wonderful and powerful; however, we cannot let this just die down which is what Monsanto would love to happen.

What we can do about this attack on human health and well-being:

Loretta Lanphier is a Naturopathic Practitioner (Traditional), Certified Clinical Nutritionist, Holistic Health Practitioner and Certified Clinical Herbalist as well as the CEO / Founder of Oasis Advanced Wellness in The Woodlands TX. She has studied and performed extensive research in health science, natural hormone balancing, anti-aging techniques, nutrition, natural medicine, weight loss, herbal remedies, non-toxic cancer support, and is actively involved in researching new natural health protocols and products.  A 14-year stage 3 colon cancer survivor, Loretta is able to relate to both-sides-of-the-health-coin as patient and practitioner when it comes to health and wellness. “My passion is counseling others about what it takes to keep the whole body healthy using natural and non-toxic methods.” Read Loretta’s health testimony Cancer: The Path to Healing. Loretta is Contributor and Editor of the worldwide E-newsletter Advanced Health & Wellness.