Reducing Your Risk for Alzheimer’s Disease

Alzheimer’s disease (AHLZ-high-merz) is a brain disorder characterized by progressive brain cell failure. It is the most common form of dementia, which is a family of diseases that leads to the inability to function normally in daily living activities. As Alzheimer’s disease advances, it affects memory, as well as learning, reasoning, and communication skills. In the latter stages, personality and behavior are usually altered, including bouts of paranoia, suspicion, delusion, and hallucinations. In the final stage of Alzheimer’s disease, total care is needed due to loss of motor skills as brain function declines. Alzheimer’s is ultimately a fatal disease if it runs the full course.

How To Reduce Your Risk for Alzheimer’s Disease

Now for the good news! There is much you can do in the way of diet, exercise, and lifestyle management which will not only reduce your risk factors for Alzheimer’s disease but are also healthy choices that you may be already making (or are intending to make). The most important steps you can take are in the realm of prevention. Below are some Alzheimer’s disease natural health suggestions for everyone over the age of 45.

In a study published in Molecular Psychiatry, researchers from the Laboratory of Behavioral Neuroscience at the National Institute on Aging (NIA) set out to learn more about the link between obesity in midlife and an Alzheimer’s onset. The research team analyzed almost 1,400 adults with no signs of cognitive decline and assessed their body mass index (BMI) at the age of 50 years old. Then, researchers used cognitive assessments every 2 years for 14 years to find signs of Alzheimer’s. During the course of the study, over 140 participants went on to develop Alzheimer’s. The team found individuals with a high BMI in midlife were more likely to have a greater abundance of amyloid proteins in the brain, a hallmark of Alzheimer’s. This was true even for subjects who were free of dementia. While the researchers are unable to describe the exact mechanisms behind their findings, they believe their results highlight the importance of maintaining a healthy weight in midlife in order to prevent early Alzheimer’s onset. They add: “Our findings raise the possibility that inexpensive, noninvasive interventions targeting midlife obesity and overweight could substantially alter the trajectory of Alzheimer’s disease, reducing its global public health and economic impact.”

Increases blood flow to the brain which keeps existing cells healthy and stimulates the growth of new cells. A UCLA-led study produced some impressive results concerning exercise’s brain-protecting properties. The study found that those who were more physically active on a regular basis had the lowest levels of tangles and plaques on the PET scans, which was interpreted to mean that they had a much lower risk of developing Alzheimer’s disease. Sunshine helps with natural D-3 production.

Keeping your mind active helps with a better connection between brain cells and it may even help to stimulate the growth of new nerve cells.

Stay hydrated using purified water. Close to three-fourths of your brain is made up of water and as such, it requires an ample supply of purified water to work at peak capacity. Gray matter actually shrinks without proper hydration, thus consistent dehydration can cause the brain to age quicker than normal. Dehydration is a growing concern among older adults in general, and government research indicates that dehydration is one of the primary reasons that people 65 and older are sent to the emergency room. Hydration is therefore very is important for the brain to function properly and the health benefits of water (proper amounts) are amazing. Try to drink 1/2 of your weight in ounces of purified water every day. Organic herbal teas can also be used for hydration. Try to avoid alcohol, sugary drinks, and caffeinated drinks.

Practice whole body detoxification. Keep all elimination routes open and working especially the digestive tract. There is overwhelming research and evidence of the gut-brain connection. Colon cleansing is a great way to keep your digestive tract working properly.

The bacteria in your gut may play a major role in the development of Alzheimer’s disease says a study that may initiate new ways for treatment and preventing neurodegenerative disease. Gut bacteria have a major impact on how people feel through the interaction between the immune system, the intestinal mucosa, and our diet. Take a high-quality probiotic every day.

As we get older, sleep is often disrupted. Many seniors complain of not being able to sleep more than four hours per night. According to Michal Twery, Ph.D., director of the National Center on Sleep Disorders Research for the National Heart, Lung, and Blood Institute says: “Sleeping is one way that your body recovers from damage and protects itself against illness. Sleep is one part of the whole rhythm of life. Whenever researchers go in and disrupt that rhythm, the biology becomes less efficient. And that inefficiency basically leads to disease.” According to Carl W. Bazil, MD, Ph.D., the Caitlin Tynan Doyle Profesor of Neurology at Columbia University Medical Center, “Systems in the body ramp way up during sleep. There’s an increase in the release of growth hormones during sleep (this is when kids get taller, our skin cells regenerate, and our hair gets longer), as well as the hormones that regulate appetite. Sleep is also when our muscles repair damage (and regular wear and tear) from throughout the day. One of the most active parts of the body during sleep is the brain. There are pronounced changes in the electrical activity of the brain during sleep, which the evidence suggests is a result of the brain’s trillions of nerve cells literally rewiring themselves. This rewiring, which happens during deep, slow-wave sleep, is how we process and are thus able to retain new information we may have learned throughout the day. Your brain is making a map of the information — making new connections and breaking other ones.”

Make sure all personal care products are non-toxic. Be aware of what you are putting on your body. If you have been exposed to heavy metals/toxic chemicals, find a practitioner who is knowledgeable in the detoxification of metals and chemicals.

Scientists from the Salk Institute discovered that tetrahydrocannabinol, a main component of cannabis, and other compounds found in marijuana could stop Alzheimer’s disease progression. The plant compounds blocked the disease, in the lab, by easing cellular inflammation and removing toxic amyloid proteins on brain cells. This is a first-of-its-kind study indicating that cannabinoids affect both inflammation and amyloid beta accumulation in nerve cells. Clinical trials are now needed to see if the promising results hold true in humans, too.

Some drugs linked to dementia include popular sleep and allergy meds. These include drugs like diphenhydramine (for allergies), dimenhydrinate (for motion sickness/nausea), a combination of ibuprofen and diphenhydramine citrate (for pain and sleep), and doxylamine (for allergies), as well as others. These drugs have anticholinergic properties, which are becoming increasingly linking to dementia.

JAMA Neurology published a 2016 study that used MRI and PET scans to show how anticholinergic drugs lower brain metabolism and trigger higher rates of brain atrophy. Taking anticholinergic drugs also led to worse scores on memory tests. Some antidepressants, COPD, and asthma medications, along with drugs for overactive bladder issues, may also be included in the anticholinergic category. If you need these medications, be sure to speak to your doctor or pharmacist to ask if safer alternatives exist. 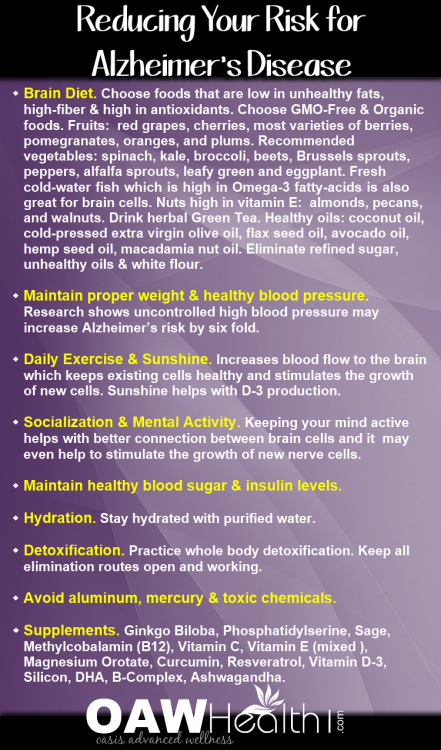 B-12 Deficiency – Know the Symptoms

Loretta Lanphier is a Naturopathic Practitioner (Traditional), Certified Clinical Nutritionist, Holistic Health Practitioner, and Certified Clinical Herbalist as well as the CEO / Founder of Oasis Advanced Wellness in The Woodlands TX. She has studied and performed extensive research in health science, natural hormone balancing, anti-aging techniques, nutrition, natural medicine, weight loss, herbal remedies, non-toxic cancer support and is actively involved in researching new natural health protocols and products.  A 20-year stage 3 colon cancer survivor, Loretta is able to relate to both-sides-of-the-health-coin as patient and practitioner when it comes to health and wellness. “My passion is counseling others about what it takes to keep the whole body healthy using natural and non-toxic methods.” Read Loretta’s health testimony Cancer: The Path to Healing. Loretta is a Contributor and Editor of the worldwide E-newsletter Advanced Health & Wellness. Check out Oasis Advanced Wellness and our natural skincare section Oasis Serene Botanicals.