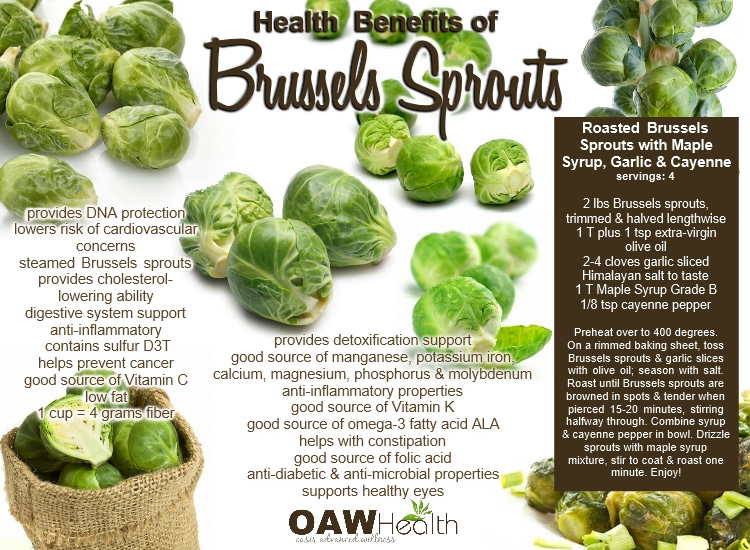 Who can resist the cute, miniature cabbage-like, cruciferous vegetables called Brussels Sprouts?  Well, for many, it might be the taste and/or unpleasant memories of being required to eat Brussels sprouts as a child — who can forget that, right?  Unfortunately many parents give up any hope of getting their children to eat these healthy veggies and have decided the fight is just not worth it. The health benefits of Brussels sprouts are many and it’s one vegetable that most households need to revisit. Sometimes just be finding a new recipe for Brussels sprouts may change the minds of those who dislike them. Hint – don’t miss the recipe at the end of the article.

As far as the health benefits of Brussels sprouts, it’s interesting to note that PubMed (health research database at the National Library of Medicine in Washington, D.C.) provides close to 100 studies that focus on Brussels sprouts.  And over half of these studies talk about the health benefits of Brussels sprouts in relationship to cancer.  Brussels sprouts provide special nutrient support for three important body systems that are closely connected with not only cancer development, but also cancer prevention. These three systems are the body’s (1) detoxification system, (2) antioxidant system, and (3) inflammatory/anti-inflammatory system. When chronic imbalances occur in any of these systems, the risk of cancer may definitely increase. However, more importantly, when imbalances occur in all three systems, the risk of cancer significantly increases. Consuming Brussels sprouts can aide in the prevention of the following types of cancer: bladder cancer, breast cancer, colon cancer, lung cancer, prostate cancer, and ovarian cancer.

What You May Not Know About Brussels Sprouts

The fiber-related components do a better job of binding together with bile acids in the digestive tract when they’ve been steamed. When this binding process takes place, it’s easier to excrete bile acids with the result being a lowering of your cholesterol levels. Raw Brussels sprouts still have cholesterol-lowering ability — just not as much as steamed Brussels sprouts.

Many believe that Brussels sprouts have unique health benefits in the area of DNA protection.

A recent study showed improved stability of DNA inside of white blood cells after daily consumption of Brussels sprouts in the amount of 1.25 cups. Interestingly, it’s the ability of certain compounds in Brussels sprouts to block the activity of sulphotransferase enzymes that researchers believe responsible for these DNA-protective benefits.

Brussels sprouts are used to determine the potential impact of cruciferous vegetables on thyroid function.

In one study, 5 ounces of Brussels sprouts were consumed on a daily basis for 4 consecutive weeks by a small group of healthy adults and not found to have an unwanted impact on their thyroid function. Follow-up studies are needed, but this study puts at least one large stamp of approval on Brussels sprouts ability to provide great health benefits without putting the thyroid gland at risk.

The anti-inflammatory nature of glucosinolates/isothiocyanates as well as other nutrients found in Brussels sprouts has been the basis for new research on inflammation-related health concerns and the potential role of Brussels sprouts in their prevention.

†Results may vary. Information and statements made are for education purposes and are not intended to replace the advice of your doctor. Oasis Advanced Wellness/OAWHealth does not dispense medical advice, prescribe, or diagnose illness. The views and nutritional advice expressed by Oasis Advanced Wellness/OAWHealth are not intended to be a substitute for conventional medical service. If you have a severe medical condition or health concern, see your physician of choice.Save