PMS, Menopause and Asthma: Is There A Connection? 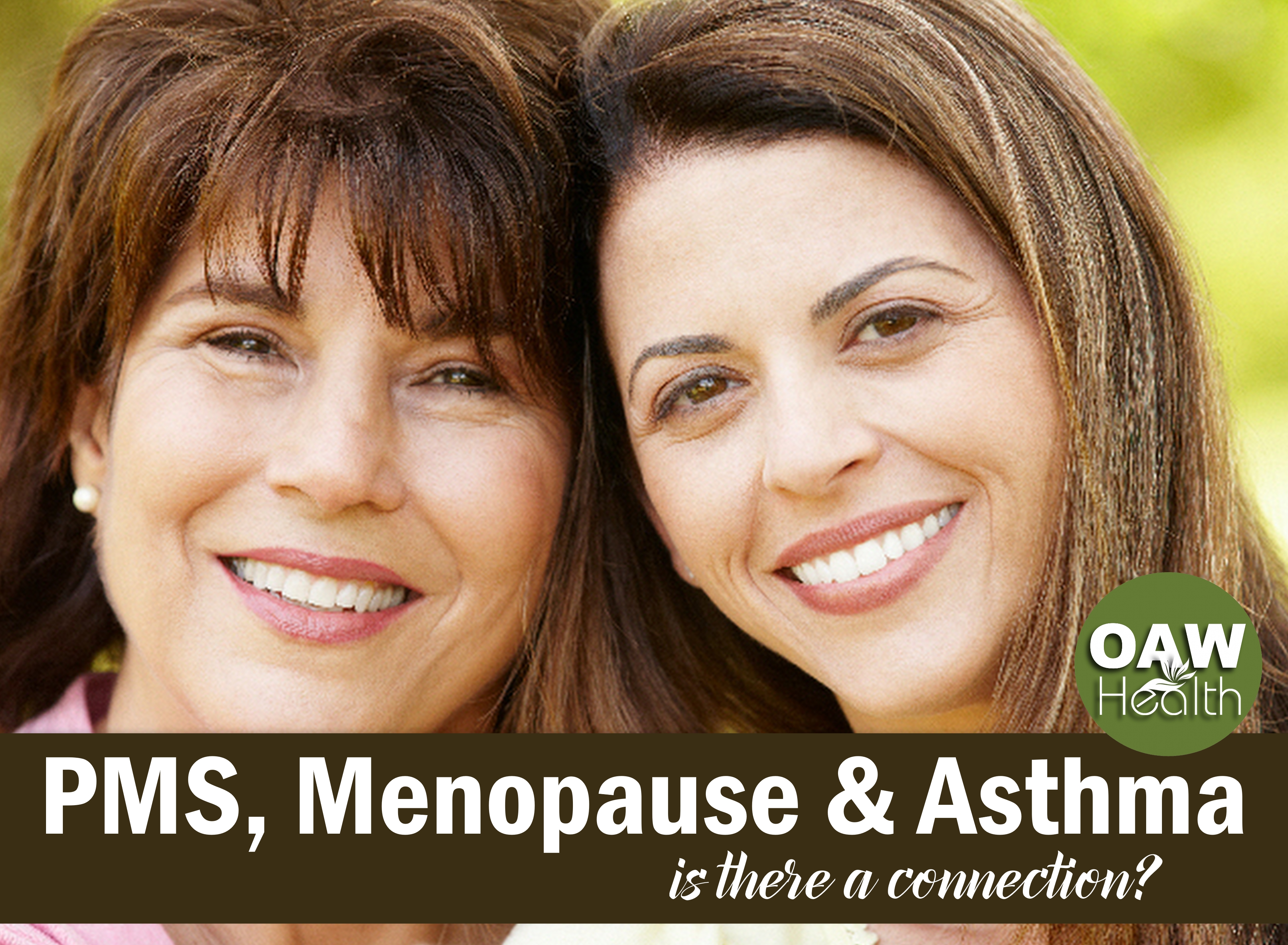 Research indicates that women with hormone imbalance issues such as PMS, pre-menopause and post-menopause  are twice as likely to develop asthma.

According to some researchers patterns of development of asthma in the general public have indicated the possibility of some sort of hormonal role. Asthma involves inflammation that constricts muscles in the airways, causing attacks of wheezing and shortness of breath. An estimated 25.9 million Americans, including 18.7 million adults, are affected by asthma. The thought process is that the changes in estrogen and progesterone levels that occur during the menstrual cycle may cause constriction of the airways.

In a large 2004 Harvard Medical study, published in the Archives of Internal Medicine, 70,000 women were examined for the likelihood of developing asthma after menopause. The study concluded that postmenopausal women taking synthetic estrogen were more than twice (actually 2.29) as likely to develop asthma than their counterparts not taking estrogen. The results were similar for women who were taking synthetic estrogen and progestin.

Statistics about how asthma affects women

Asthma is found to be more common in boys than girls. At the time of puberty, asthma occurs in boys and girls equally. After puberty, women are more likely than men to have asthma. Therefore as a woman’s hormonal system matures it may play a role in the changing prevalence of asthma.

Studies have shown that approximately one third of women report that their symptoms are worse just before or during menstruation, with the most severe attacks usually occurring three days before and four days into the menstrual period. Some research indicates that in women with PMS asthma, the rise in progesterone and sharp decline in estrogen shortly before menstruation increase the risk for asthma attacks. Further evidence of the hormone-asthma link was discovered after a lengthy study by researchers at Brigham and Women’s Hospital in Boston. They found that synthetic hormone replacement therapy may as much as double the risk of developing asthma in postmenopausal women.

It now appears that synthetic hormone replacement therapy may also increase the risk of developing asthma or a respiratory allergy, according to research released by the European Respiratory Society which is held in Vienna. Women on HRT were 40 to 50% more likely to suffer from asthma or to exhibit asthma symptoms. The increased risk rose to 60% in the case of allergic asthma. Women on HRT were 30% more often affected by hay fever.

Researcher Dr. R. Graham Barr of Columbia Presbyterian Medical Center acknowledged that women who take synthetic hormones might be more likely to be diagnosed with asthma simply because they might have more doctors’ visits than nonusers. But they also found an increased asthma risk among synthetic hormone users who had few doctors’ visits. Estrogen tends to make cells retain more fluid, which might narrow lung airways, Barr said. Also, some data have shown that synthetic hormone replacement can increase levels of certain inflammatory markers in the blood, which might also affect asthma risk.

It is important to note that the use of normal inhalers in women who have pre-menstrual and postmenopausal asthma, can make it worse. The most probable reason is because inhalers dispense synthetic corticosteroids that occupy progesterone receptors in the cells, thus blocking the action of progesterone and creating even more estrogen dominance.

Some of the research about the effects of estrogen on asthma has appeared contradictory. Studies that measure airway constriction and flow in asthma show that estrogen keeps airways more open during an asthma attack. It is well known that estrogen actually increases nitric oxide, which aids in keeping airways open relaxed. But because estrogen is also pro-inflammatory, there is at point at which excess estrogen cancels out the benefit.

If you are a woman and have asthma what can you do?

For women who find a relationship between their menstrual cycles and asthma or develop asthma later in life while using synthetic hormones, there is a way to balance out the hormones using natural bio-identical progesterone. One theory is that the decrease in progesterone levels that occurs a few days before the menstrual cycle may contribute to the heightened probability of an asthma attack.

Keep a diary of your symptoms and compare it to your menstrual cycle. Notice any patterns.

Aspirin and other non-steroid medications such as Advil and Aleve can worsen asthma symptoms. These drugs are commonly used for relief of menstrual cramps and have recently been proven unsafe to use on a regular basis. For many women bio-identical progesterone is excellent in the relief of PMS and menstrual cramps.

Educate yourself about natural (human-identical) progesterone for the use of hormonal imbalance. I recommend Oasis Serene rejuvenating progesterone cream.

Liver cleansing and support.  Your liver plays an important part in making sure excessive amounts of hormones are not reabsorbed into your body. Thus it becomes very important to support the health of your liver. I recommend using a whole-herb liver cleanse and support product such as Livatrex.

Diet – Concentrate on foods that don’t promote mucus production such as raw organic fruits and vegetables, limited whole grains, organic seeds, organic-free-range poultry and cold-water fish. Include one clove of garlic in your daily diet. Use two tablespoons of ground flaxseed daily for omega-3 fatty acids. Omega-3s act as an anti-inflammatory on the body. Eliminate all dairy, sugar, pre-packaged foods and fried foods. Avoid foods that cause gas. Try to eat five small meals a day. Bottom line: Eat as close to nature as possible. Gluten: According to a 2011 study in the Journal of Allergy and Clinical Immunology, there is a strong correlation between gluten intolerance and asthma. As an FYI: Baker’s Asthma dates back to an observation from 1700.  Bakers exposed to large amounts of flour dust suffered respiratory symptoms that mimicked asthma.  This was the first known historical connection between grain inducing asthma.

Water – Drink half your body weight in ounces of pure, clean water every day. This will continually flush toxins from the system. According to experts, water is helpful after an asthma attack in breaking up mucus.

Magnesium Orotate – Magnesium acts as a muscle relaxant and may therefore improve lung function. Can also help with PMS symptoms.

Systemic and Digestive Enzymes – Proprietary Blend of systemic enzymes that includes Serrapeptase, Nattokinase, Bromelain, proteolytic enzymes and proven antioxidants. These enzymes will improve the absorption of nutrients from food and will help to decrease food reactions.

Vitamin C – 1,000 mg two to ten times daily. You must build up to bowel tolerance. Vitamin C has antihistamine benefits which will help with inflammation. I recommend Vitality C.

Oregano Oil – Oregano is an anti-fungal and anti-microbal herb. I recommend Oregatrex.


Aromatherapy – Diffuse high-quality essential oils through a heat-free and water-free aromatherapy diffuser. Oils that open the airways and loosen congestion are lavender, tea tree and eucalyptus.

Exercise – Exercise increases the ability for the lungs to take in oxygen. Walking for 30 minutes each day is preferable. If it is cold outside, then use a treadmill in the home. Educate yourself about deep breathing and do this daily. Exercise also helps to alleviate some symptoms of menopause and PMS.

Air Purification – Use an ionic air purifier to keep the air clean in your home and office. This is especially important if you work in an office or live in a home that is older than five years.

As you can see using a whole-body approach will help to alleviate hormonal imbalance which may result in the alleviation of asthma, especially during the days before and after the menstrual cycle. For more information on how to bring the body into total health my e-book, Proven Secrets to Whole Body Hormone Balance which is a great place to begin your education. Not only will you learn how to balance the hormonal system, but in return will help to reduce or eliminate your asthma.

Related articles across the web