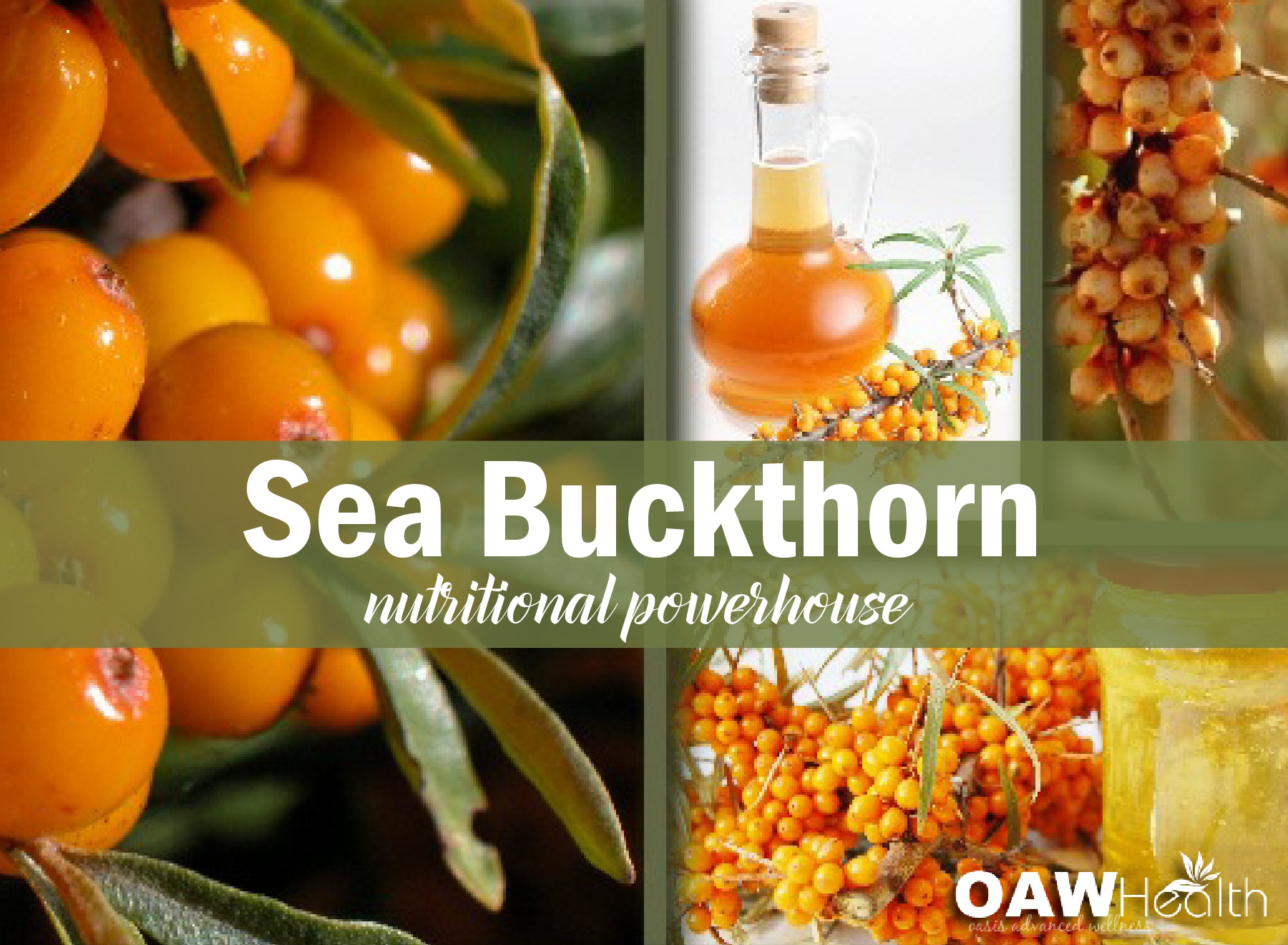 Some natural substances seem to be endowed with an unusually high number of benefits, and sea buckthorn oil definitely falls into that category. This plant, labeled by some as a Synergistic Superfruit, is a powerhouse of nutrition that contains almost 200 known nutritional compounds, and historically was used for the prevention and treatment of many health concerns. In fact, history indicates that the Mongol conqueror, Genghis Khan, who put together one of the world’s largest empires spanning from China to Eastern Europe, relied on three beliefs for a strong military: well-organized armies, strict discipline, and sea buckthorn.

Sea buckthorn (Hippophae rhamnoides L.) is originally native to parts of Russia and China, and has been used by Eurasian people for thousands of years. In addition to its nutritional and medicinal qualities, this hardy species is also a very versatile plant that can grow in both warm and cold climates, wet and dry soils, prevent erosion due to its deep roots, act as a nitrogen stabilizer, and provide shelter both for other crops and in landscaping applications. In recent years, sea buckthorn plantations have sprung up across Canada.

“Sea buckthorn has been shown in hundreds of studies to aid digestion, thwart weight gain, support cardiovascular health, slow skin aging and more when taken internally in various doses or applied topically as an oil or cream.” Melaina Juntti


The health benefits of sea buckthorn are almost too many to name, but let’s look at some of the highlights. The seeds, leaves, fruit, and oil of Sea Buckthorn are rich in vitamins A, C, and E, as well as numerous trace minerals. It is also very high in antioxidant phytochemicals such as carotenoids and flavonoids. Sea Buckthorn is additionally one of the most potent plant sources of essential fatty acids on the planet, being especially high in omega-3s, and to a lesser degree, omega-6 fatty acids All of these qualities make Sea Buckthorn a legitimate superfood that may promote wellness in a variety of ways. Some of these include immune system support, treatment of autoimmune disorders, cardiac health, cancer prevention, care for many common skin conditions, anti-inflammatory properties, pain reduction, healing for ulcers and other intestinal concerns, and as an organic food crop. Let’s take a look in more detail at several of these uses.

The anti-inflammatory action of sea buckthorn is one of its most outstanding features. Due to the way it is formed, and the manner in which its components compliment each other, sea buckthorn is truly a synergistic giant in the nutritional world. Its numerous bio-active agents include an almost 50-50 balance of omega-3s and omega-6s, several other rare fatty acids, and potent antioxidants such as superoxide dismutase (SOD), beta carotene, vitamin E, and folic acid, making for a powerful combination. Volumes of recent research indicate that the control of inflammation is one of the most vital necessities for wellness. Because of its anti-inflammatory strengths, Sea Buckthorn can help to prevent and treat heart disease and stroke as well as autoimmune conditions such as fibromyalgia and arthritis. This highly nutritious plant is also an excellent tool to help prevent many types of cancer.

Scientists now believe the most delicate of body tissues, the mucous membranes, have the greatest need for Omega 7 fatty acids. Just as the skin protects the outside of the body, mucous membranes protect the inside of the body. They line the digestive, respiratory, and urogenital tracts, as well as the inner surface of the eyes. They are important channels for interactions between the body and the environment, and are the major routes for pathogens, toxins, and allergens to enter the body. Thus mucous membranes play an important role in the health of the entire body. Environmental stressors like pollution and toxic chemicals, toxic foods, and even natural aging processes such as menopause can challenge the sensitive mucous membranes. Fortunately, Omega 7 fatty acids, which contain palmitoleic acid — a fatty acid found in human skin that helps moisturize and repair — are now being recognized as nourishment that can protect, replenish, moisturize, and restore mucus membranes. Omega 7 is also very important for women going through the pre-menopause and menopause years who suffer from symptoms of vaginal dryness or the feeling of dryness through the entire body. Vegetarians who may not get a good level of omega 3 fatty acids in their diet will also benefit from omega 7 fatty acids. Those who suffer from a dry respiratory tract may also benefit from the addition of Omega 7 fatty acids.

The health benefits of sea buckthorn for the immune system are also significant. One of the reasons for this is the high amount of omega-3 fatty acids, such as DHA and others, found in this plant. The diet of the typical American contains a larger percentage of omega-6s than omega-3s, and this imbalance can lead to a multitude of health concerns. One result of a diet that includes insufficient amounts of omega-3 is a weakened immune system. To make matters worse, too much omega-6 (in relation to the amount of omega-3) can actually work synergistic manner against the immune system by inhibiting its disease-fighting and anti-inflammatory functions. Up-to-date research now indicates that one of the best improvements that can be made to one’s overall health is to increase omega-3s in the diet. Traditionally, fish and fish oil have been one of the best sources of omega-3. However, oils such as Hemp Seed oil, Flax Seed oil and now sea buckthorn are better choices, as they are so rich in other nutrients as well, and are a renewable resource, unlike wild fish.

Finally, let’s consider the value of sea buckthorn as a food source. Besides all of the vitamins, minerals, antioxidants, and other nutritional aspects contained in sea buckthorn oil, the leaves of the plant contain about 25% protein. Virtually all parts of this superfood, including the seeds, fruit, oil, and leaves, can be consumed directly or can be used in cooking and preparation of other foods. Considering how hardy and versatile this plant is, and how easily it fits into renewable agriculture, organic sea buckthorn may be a key crop in both developed and Third World countries. In fact, some are predicting that the production of this plant will increase dramatically in the near future. As more people become aware of the many health advantages of sea buckthorn, perhaps we see this incredible plant come into more common use throughout the world both as a source of food and for its bounty of nutritional wealth.

In cosmetics, sea buckthorn oil is showing up in lotions, creams, facial scrubs and other cosmetics and for good reason. Sea buckthorn oil helps balance out the skin’s own sebum production, heal acne scars, rosacea and age spots, assists in wound healing, and eliminates some types of skin rashes. It slows down the aging process, helps increase cellular vitality, and is beneficial for overall skin health. Sea buckthorn oil has been used in Russia to treat radiation burns, sunburn, and eczema. Using skincare products that include sea buckthorn oil as well as other health ingredients can help to boost any anti-aging skincare protocol.

It’s important to know that sea buckthorn oil may slow blood clotting and it has been found to increase bleeding and bruising in those with bleeding disorders. Sea buckthorn is also known to lower blood pressure and may cause blood pressure to lower for those who already have low blood pressure. It’s also best to stop using it about two weeks prior to any scheduled surgery. As always, if you have any illness or disease, please consult with a trusted and knowledgeable healthcare practitioner.