Inflammation – Root Cause of Disease 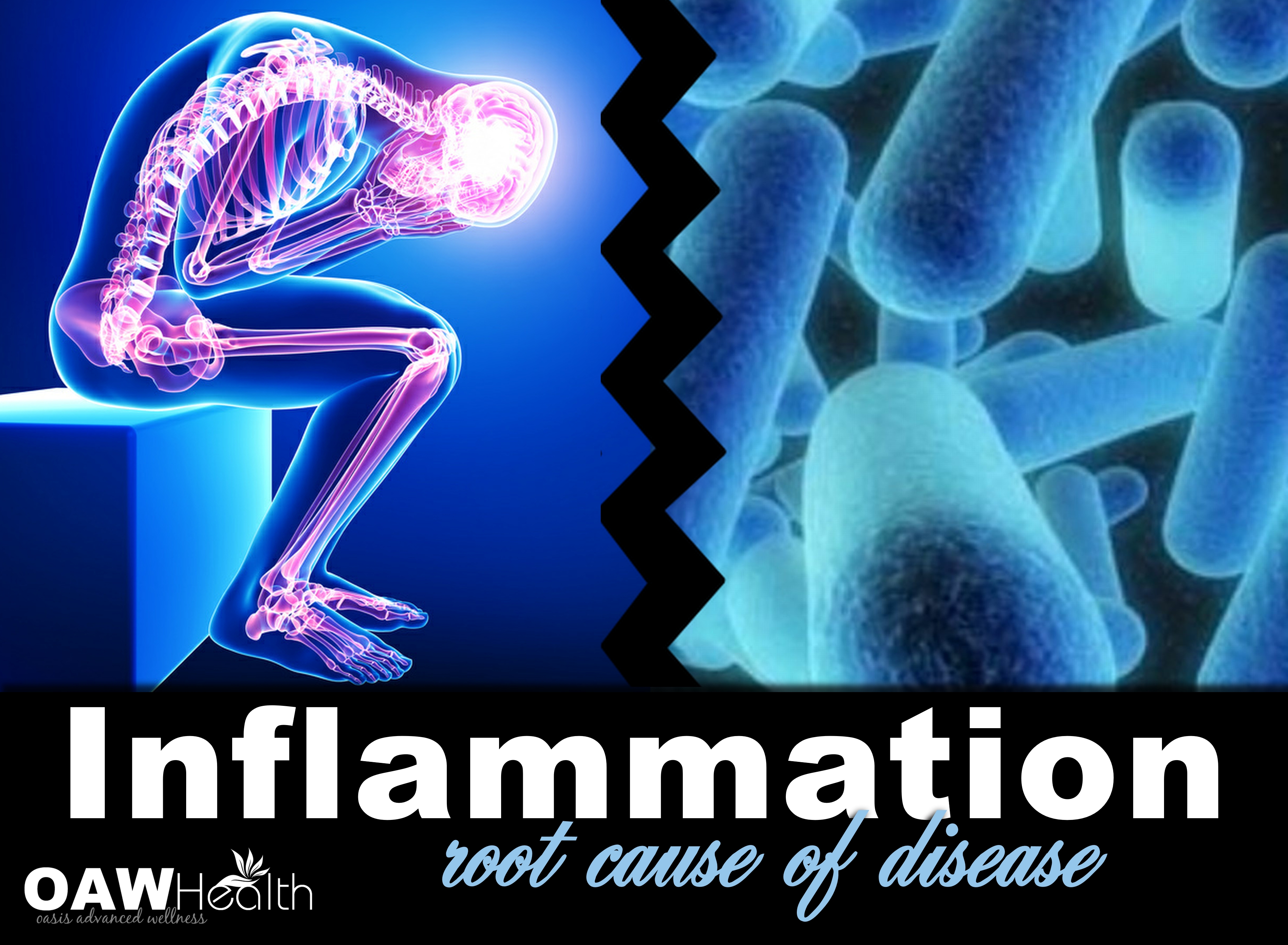 Medical science is undergoing a quiet revolution. Many alternative and natural health care practitioners have long understood the connection between disease and inflammation, and the role that the immune system plays. However, the conventional medical establishment is beginning to rethink the whole matter. Certain illnesses, such as arthritis, have been widely accepted as “inflammatory diseases,” but more and more research is pointing towards the key role that chronic inflammation plays in other health concerns such as heart disease, diabetes and depression. In fact, some researchers believe that inflammation is one of the major players in virtually all forms of disease.

Inflammation is a term that is no stranger to most people. It is associated with redness and tenderness in wounds, and is a normal response of the body when there is tissue damage or infection. Inflammation is a function of the immune system that is part of the way that our marvelous bodies seek to repair and heal themselves. However, when the inflammatory process is out of balance due to an immune system that is not functioning properly, the chemical responses that trigger inflammation do not get turned off after the crisis is dealt with, and the result is chronic inflammation. The immune system remains on high alert, and it begins to get aggressive with healthy tissues, mistakenly viewing them as invaders to be attacked. This is known as autoimmune disease, and there has been a significant increase in the incidence of autoimmune diseases in recent decades.

There are many types of autoimmune disease, and we are just beginning to understand in more detail how chronic inflammation and autoimmune disease are related. Many illnesses are now thought to be autoimmune in nature, including allergies, asthma, diabetes, and even conventional medicine is now recognizing the link between heart disease, atherosclerosis, and stroke and chronic inflammation. Inflammatory disease is at epidemic levels in the United States and other developed nations. Over 70 million Americans suffer from arthritis, close to 40 million have allergies, and about 17 million are asthmatic. Not to mention the onslaught of coronary disease, which is the number one killer in the US. Let’s take a closer look at the specifics of inflammation, as it relates to the disease process, and some possible reasons why inflammatory diseases are getting increasingly more common.

A healthy immune system responds to wounds or infectious agents by sending out chemicals and specialist cells to protect and heal the body. This is a normal response that indicates an immune system that is strong and functional. Inflammatory or autoimmune diseases become a problem when the immune system gets its signals crossed and does not stop responding to the healing crisis, thus inflammation continues. This is chronic inflammation, and when the immune system runs amok like this, it actually harms the body’s tissues and causes disease rather than preventing it.

With some conditions, such as rheumatoid arthritis, it is relatively simple to understand the harmful effects of inflammation. It has long been known that arthritis is the result of too much chronic inflammation to joints and connective tissues. But the really big news about inflammation is that it is now becoming clear that chronic inflammation may be one of the foundational principles behind most, if not all, disease. Scientists are starting to connect the dots, and the evidence points to inflammation as the culprit behind conditions that, until now, were blamed on different factors. In a nutshell, any factors that “cause” an illness are in reality causing inflammation that triggers the symptom of that illness. And beyond that, even a bigger picture is beginning to unfold. It appears that chronic inflammation related to a disease in one part of the body does not tend to remain local, but may make a person susceptible to other illnesses because of the common factor behind them all: chronic inflammation. Once inflammation gets a foot hold in the body, it appears to alter the immune system so that systematic autoimmune diseases are enabled to spread and flourish.

The Link Between Coronary Disease and Inflammation

The discovery of the chronic inflammation / autoimmune matrix has literally revolutionized medicine. Perhaps the best way to illustrate this is to discuss a specific illness, coronary disease–including atherosclerosis and stroke-and how our understanding of it has changed.

The standard approach to heart attacks, stroke, and atherosclerosis (hardening of the arteries) has typically been that it is basically a circulatory disorder that occurs when arteries get clogged and interfere with the blood supply. Conventional medicine thought they had it all figured out when they identified certain factors that “cause” coronary disease, such as a high-fat diet, increased levels of LDL cholesterol, obesity, a sedentary lifestyle, smoking, and others. These are certainly factors in heart disease, but what is coming to light is that they are actually factors that cause undue inflammation, and the inflammation is found to be a common feature that links many diseases that up until now were not thought to be related. One researcher stated that since his understanding of this common link, it has totally changed the way he educates others. He often gives lectures, and he has taken to using many of the same slides to illustrate disease, whether he is discussing illnesses of the heart, lungs, kidneys, or other tissues. Since they are all a function of chronic inflammation, the similarities between many diseases are astounding.

Let’s get back to coronary disease. Not only has the “inflammation factor” affected what we thought we already knew about heart disease, but it has also expanded our understanding. For example, when inflammation is considered in the equation, it appears that atherosclerosis becomes more than simply a “plumbing problem” regarding clogged arteries. In addition, research indicates that LDL gets embedded into the artery walls, and the immune system then targets it as an invader, and the ensuing inflammation further damages the arteries and compounds the problem. Before this discovery, the immune system and chronic inflammation were never linked to heart disease. This major breakthrough is causing scientists to take another long look at everything they “know” about disease. Perhaps the key to curing and preventing many diseases, such as cancer, diabetes, and a slew of other illnesses is to target the chronic inflammation.

Before we leave the topic of heart disease, let me discuss an important indicator that makes all of the above more than just theory. What if there were a test that could indicate the levels of inflammation in the body. Could this information be used to treat and predict heart disease, and ultimately other diseases as well? Well there is a test, and it is thought, even by conventional medicine, that it is very useful at prediction and prevention.

C-reactive protein (CRP) is a protein that is produced as byproduct of inflammation, and levels of CRP can be measured in the blood, indicating the overall degree of inflammation in the body. Studies have been done specifically on the relationship between cardiovascular disease and levels of CRP, and a test called the highly-sensitive C-reactive protein assay (hs-CRP) has been developed. This is being used by mainstream medical cardiologists to predict overall risk for heart disease, the risk of first-time cardiovascular events such as heart attack and stroke, and to predict the likelihood of recurrent occurrences of such events in folks who have a history of them.

Hs-CRP is a relatively inexpensive test that will run you about $30, give or take, if you don’t have insurance to cover it. Unless you are in the peak of health and are very disciplined in your diet and lifestyle, I would recommend that you request this test to get an idea of the amount of inflammation in your body. hs-CRP results are rated as follows:

The really exciting thing is that CRP is only one of multiple inflammation indicators, and as we learn more we may be able to link other indicators with specific diseases. But even knowledge of overall levels of systemic inflammation is very useful. The next logical question is: what causes chronic inflammation, and how can I prevent it?

Depression – An Allergic Reaction to Inflammation

A recent study indicates that an allergic reaction to inflammation can cause depression. Health Science and the Human Brain (January 6, 2015) noted the new research reveals many cases of depression are actually caused by an allergic reaction to inflammation.  Tim de Chant of NOVA writes: “Inflammation is our immune system’s natural response to injuries, infections, or foreign compounds. When triggered, the body pumps various cells and proteins to the site through the blood stream, including cytokines, a class of proteins that facilitate intercellular communication.  It also happens that people suffering from depression are loaded with cytokines.”

By treating the inflammatory symptoms of depression — rather than the neurological ones — researchers and doctors are opening up an exciting new dimension in the fight against what has become a global epidemic.  There is evidence that omega 3 fatty acids and curcumin, an extract of the spice turmeric, might have similar effects as anti-inflammatory drugs. Other foods that help to fight inflammation are ginger root, dark red cherries, blueberries, and hibiscus tea fight inflammation.

There is most definitely a connection between food and mood. Sugar is one of the leading causes of the blues. Ever since the get-rid-of-all-fat craze, we’ve been dumping sugar in just about everything.  The result is that depression rates are rising, as well as diabetes, heart disease, and cancer.

Common causes of increased inflammation include:

How to Reduce Inflammation Naturally

The best way to minimize disease in your life is to pursue wellness with a lifestyle of healthy eating, exercise, and avoidance of known toxins. A healthy diet is especially important, and some foods have been identified that both lower and raise inflammation levels.

We have only begun to scratch the surface when it comes to the understanding of the role of inflammation in disease. It will be fascinating to watch as our knowledge increases, and see how much of a difference this makes in our pursuit of health and avoidance of sickness. Inflammation may well be the buzz word regarding wholeness and good health for many years to come.