Food Opiates – Are You Addicted? 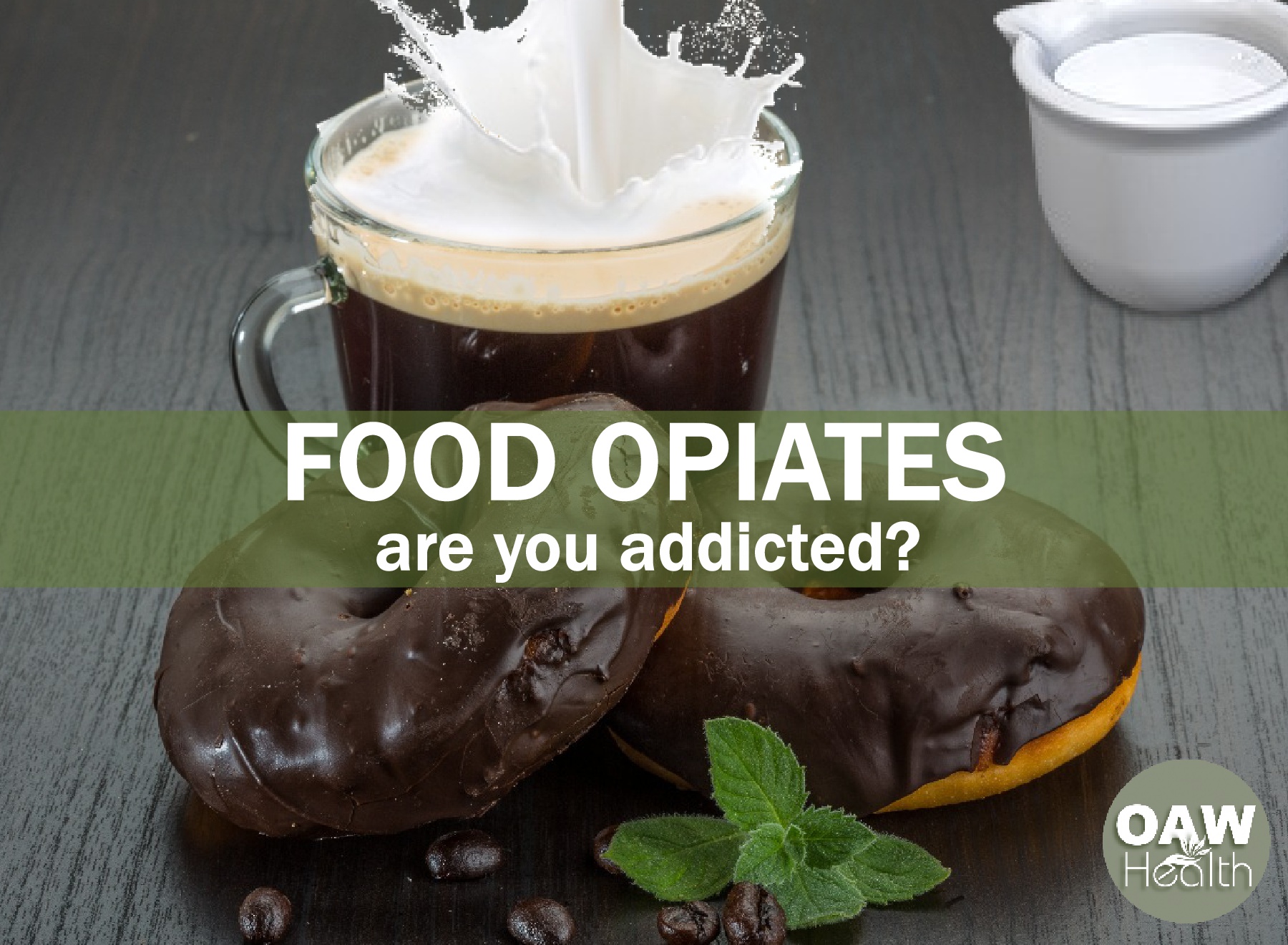 Ever wonder why certain foods that you consume seem to affect your mood and emotions more than others? What about when difficult situations in your life come up and the first thing you think about is digging into a carton of ice cream or downing an entire bag of chips or cookies to calm your emotions? How many times have you heard someone say, “I just can’t live without pasta or bread?” Much like a person dealing with a prescription opiate addiction, you could be experiencing an addiction to food opiates.

Food addictions are not always psychological concerns, but can also have a biological component. In fact some of the most often consumed foods in the United States actually contain narcotic properties linked to the inclusion of psychoactive chemicals that can attach to opioid receptors in the nervous system. These peptides are so very powerful that doctors can actually stop their action with the opioid antagonist naltrexone – a drug used to treat addiction and overdose concerns among those that abuse heroin.

One study performed by Yeomans placed 20 male volunteers on 50mg of naltrexone. Appetite was monitored by determining how much food was left. The volunteers also made appetite ratings after every 50g consumed. Pasta with tomato sauce, and pasta with a tomato and cheese sauce were the meals. The subjects ate significantly less when taking the naltrexone compared to the initial day and the placebo condition (Yeomans, 1997).

“Food opiates” are also concentrated in wheat and dairy products, particularly in cow’s milk. Wheat contains the following opioid peptides, known as gluten exorphins alongside which are listed their amino acid structure:

Gluten exorphins are a group of opioid peptides formed during digestion of the gluten protein. It is theorized that people with autism and schizophrenia have abnormal leakage from the gut of these compounds, which then pass through the blood-brain barrier and disrupt brain function. This is known as the opioid excess theory or a part of leaky gut syndrome.

Cow’s milk, depending on the milk variety (A1 or A2), contains a variety of combinations of the following casomorphin peptides:

Food opiates are found in many places in which you might be surprised. Fructose, while not itself an opioid peptide, is known to increase brain levels of endogenous morphine following consumption and may even produce metabolic products in the brain very similar to those produced by morphine. Fructose has also been identified to stimulate a “hedonic pathway” in the brain, not unlike alcohol, which incidentally is metabolized along the same liver pathways. In separate or concentrated form, fructose is highly toxic and has been linked to at least 70 health conditions.

Other common food opiates include spinach, coffee, wheat, rice protein, meat and fish protein, chocolate and of course the most common, sugar.

Our obsession with opiate peptides actually begins at birth, which is our Creator’s intelligent design. At birth there is a natural, strong bond between mother and offspring which is completed with the act of breastfeeding. So it makes sense that breast milk contains actual morphine. This ensures that the instinctive bond forms between mother and baby and the baby will continually desire and obtain nourishment as well as instinctively feel secure.

The fact that our very first food — breast milk — contains opiates and that the biosynthetic pathway for morphine exist in tissues such as the liver, blood and brain, indicate that humans were destined to be drawn to substances that either mimic the action of opiates, or modulate their secretion and/or activity within our bodies.

It’s interesting to note that for the same reason that human breast milk contains morphine, the casomorphins in cow’s milk are intended to sedate/pacify/anesthetize calves born into the wild. So it’s really no surprise that humans are the only mammals who never stop weaning themselves from this narcotic potion called cow’s milk.

Cereal grains and dairy products are introduce early-on to children.  The gluten from grain products and the casein from dairy products, as I have mentioned, contain morphine like substances on top of the increased appetite, increased dopamine, and decreased GABA. Could this be a factor as to why the obesity rate, depression rate, rates of ADHD, etc. among children continue to climb? I would say absolutely! This means it is imperative to choose to breast-feed your child and to actively teach your children, beginning at very young age, how to eat healthy.

A study by Marabia found that “food addicts have the same caloric intake as non-addicts. But, the difference is that addicts tend to replace foods that are rich in fats and proteins with foods rich in sucrose and relatively poor in vitamins and minerals” (Morabia, 1989). Sound like any children you know?

Food Opiates and Your Digestive Tract

Recent statistics show that gastrointestinal complaints account for nearly a third of all visits to primary care doctors and that nearly one in six Americans suffer from digestive disease. One of the huge side-effects from the use of opiate drugs is constipation. In fact, for those that continually take opiate drugs for pain, constipation usually becomes severe. Many doctors will automatically prescribe a chemical laxative to go along with the prescription for opiates. All opiates cause concerns with peristalsis, the rhythmic contractions of the bowel that move feces out of the body. Because your digestive tract is where 80% of your immune system resides, severe constipation may bring about other immune related health issues.

Ultimately, many food opiates are consumed in order to self-medicate. As a point of reference, coffee has intense psychoactive properties that cannot be reduced to its caffeine content alone. The opiate-like property of coffee explains why it may relax and/or reduce stress in certain people and raise the threshold of anxiety or aggression in a way quite opposite to what would be expected from the effects of caffeine alone.

These food opiates, such as are found in wheat and cow’s milk products, are what may lure many into unhealthy eating practices. Wheat has been linked to over 160 health conditions, and cow’s milk is known to be a risk factor for type 1 diabetes as well as a big cause of allergies. However, both are consumed worldwide in the billions of pounds and even praised as “health foods” by those unaware of the addictive power they may have on them. Is it any wonder that when information such as this is passed along many people are actually angered and defend these foods as if the removal of these foods from their diet would somehow harm them?

It’s also important to understand that the psychological effect from these foods is sustained as long as one continues to get their daily “fix”. But once the foods are removed, many experience symptoms that are identical to those associated with withdrawal from opiate drugs.

DID YOU KNOW? Gluten Withdrawal after stopping wheat or Casein Withdrawal
from milk products can be painful, exhausting, and depressing, with weakness, anger,
and “brain fog” as subsequent downstream effects that can drive the uninformed
right back to their comfort foods.

Certainly a good argument could be made that many of the most popularly consumed foods in the United States may not, in fact, be consumed for their nutritive value, but more so for their addictive properties. However, we seem to condone the use of food in this manner because we are led to believe that most food is harmless.

In summary, certain foods are known to have profound neuroendocrine altering properties. In fact, one of the best ways to tell if food opiates are affecting your health is to try an elimination diet. Often with just the elimination gluten and or cow’s milk, the physiological chains become unlocked, and it’s possible to experience renewed health, wellness and vitality. Over the years, many of my clients have voiced to me that once they removed gluten and/or cow’s milk from their diet, they literally began to feel like a brand new person with a new lease on life!

Antagonism of the morphine-induced locomotor activation of mice by fructose: comparison with other opiates and sugars, and sugar effects on brain morphine. Life Sci. 1991;49(10):727-34.