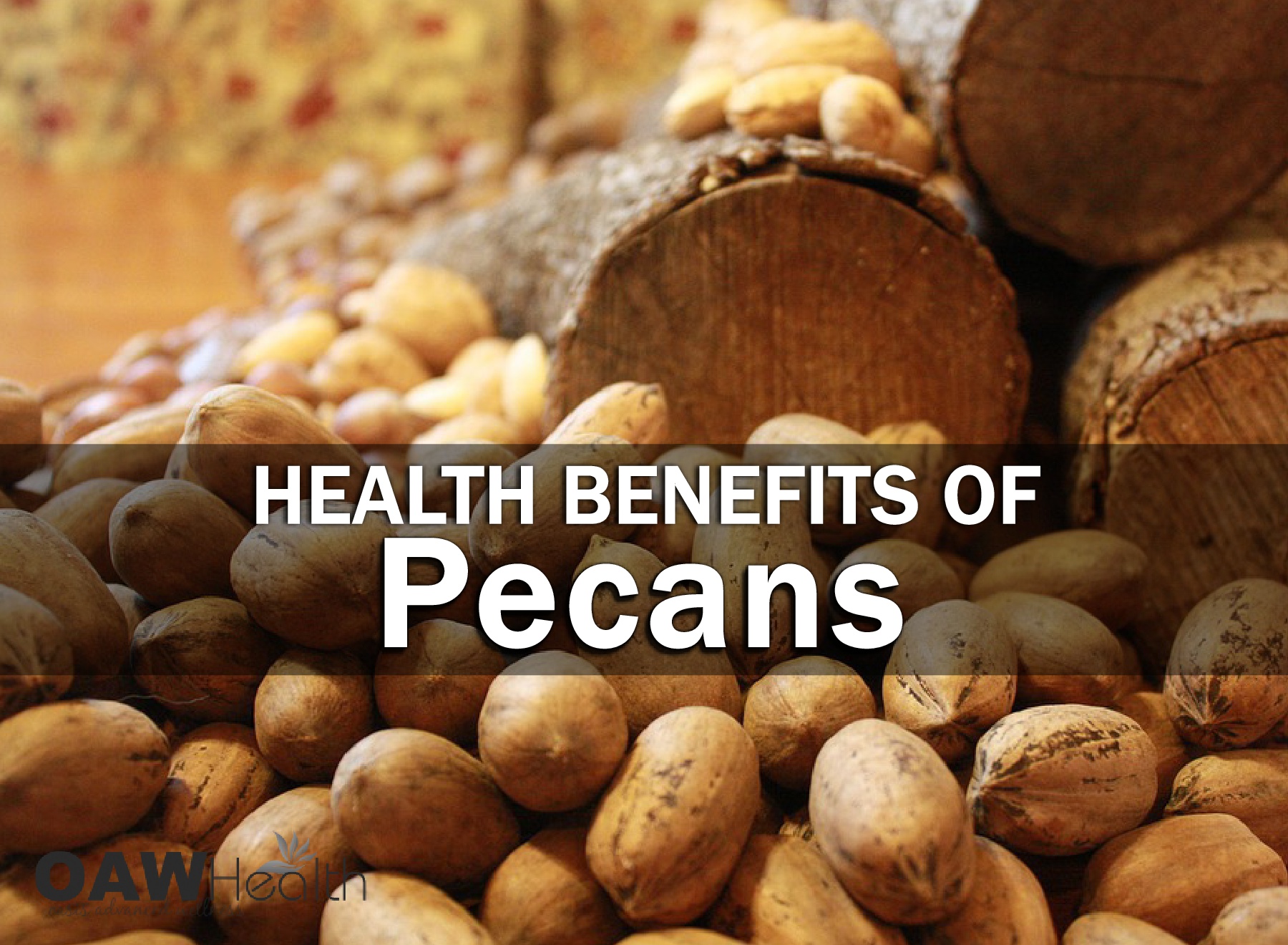 If you’ve never had the privilege of eating a delicious piece of southern pecan pie, you are truly missing out. The rich buttery flavor of pecans makes them suitable for both savory and sweet dishes. And whether you pronoun the name of this amazing nut as a pah-con or a pee-can, the amazing health benefits of pecans remain extraordinary. In fact, many believe that pecans are the cream-of-the crop among all nuts.

The Journal of Agricultural and Food Chemistry reports that pecans (19 halves, 193 calories per serving) contain more antioxidants than any other tree nut. And, in fact, pecans rank among the top 15 foods with the highest levels of antioxidants according to the USDA. They are also rich in vitamins and minerals such as manganese, potassium, calcium, iron, magnesium, zinc, and selenium, offering some powerful health benefits. Pecans are also rich in the nine essential amino acids.

DID YOU KNOW?
The health benefits of pecans may include a decrease in the risk of cancer, coronary heart disease, and neurological disease, like Alzheimer’s?

A Pecan Enriched Diet plays a role in lowering cholesterol

A new study on Pecans published in the January 2011 Journal of Nutrition shows again that pecans help prevent heart disease. Pecans contain antioxidant factors which, when absorbed in the body, provide a protective effect against disease. This research compared a 28% fat diet, recommended by the American Heart Association for individuals with the high cholesterol levels, to the pecan-enriched, 40% fat diet The results showed the pecan enriched diet lowered total cholesterol by 11.5% and the 28% fat diet lowered total cholesterol by 5.2%.

Several studies have found that nuts, including pecans, are a good idea to include in your daily diet to help boost your immune system . A study completed at the University of Florida found that pecans come loaded with antioxidants that fight heart disease and cancer. The Mayo Clinic conducted a study which found that all nuts are nutrient dense and naturally cholesterol free. Not only are nuts cholesterol free but, studies have suggested that eating pecans may help reduce LDL cholesterol levels, leading to a reduction in the risk of heart attacks and coronary artery disease. The serving size for nuts is about one ounce, which equals about 15 pecan halves. Pecans are a great staple for vegetarians, because one serving of pecans can take the place of the protein found in an ounce of meat.

Benefits of Pecans Acknowledged by the FDA

The FDA approved the following health claim concerning pecans: “Scientific evidence suggests, but does not prove, that eating 1.5 ounces per day of most nuts, such as pecans, as part of a diet low in saturated fat and cholesterol, may reduce the risk of heart disease.” Keep that in mind when you are consuming your daily amount of pecans or other nuts.

DID YOU KNOW?
Pecans passed NASA’s stringent standards for
nutrition per weight and accompanied astronauts
on the Apollo 13 and 14 moon missions.

A fistful of pecans a day may help to protect the nervous system, according to a new animal study published by Current Topics in Nutraceutical Research. The research suggests that adding pecans to your diet may delay the progression of age-related motor neuron degeneration. Vitamin E, a natural antioxidant found in pecans, may provide a key element Antioxidants are nutrients found in foods that help protect against cell damage, and studies have shown, can help fight disease like Alzheimer’s, Parkinson’s, cancer, and heart disease. The study was conducted at the Center of Cellular Neurobiology at the University of Massachusetts Lowell.

Pecans are a rich source of oleic acid, the same type of fatty acid found in olive oil. Researchers from Northwestern University in Chicago recently found in laboratory tests that oleic acid has the ability to suppress the activity of a gene in cells thought to trigger breast cancer. While this area of study is still in its early stages, the researchers say it could eventually translate into a recommendation to eat more foods rich in oleic acid, like pecans and olive oil. A one-ounce serving of pecans provides about 25% more oleic acid than a one-tablespoon serving of olive oil.

Researchers from Loma Linda University in California and New Mexico State University in Las Cruces, New Mexico, have confirmed that when pecans are part of the daily diet, levels of “bad” cholesterol in the blood go down. Pecans get their cholesterol-lowering ability from both the type of fat they contain and the presence of beta-sitosterol, a natural cholesterol-lowering compound. Eating 1 ½ ounces of pecans a day (27 to 30 pecan halves – about a fistful), along with a heart-healthy diet, can reduce the risk of heart disease.

The same natural compound, beta-sitosterol, that gives pecans its cholesterol-lowering power, is also effective in treating the symptoms of benign prostatic hyperplasia (BPH). About two ounces of pecans provides an amount of beta-sitosterol found to be effective. In addition, a recent laboratory study from Purdue University found that gamma-tocopherol, the type of vitamin E found in pecans, has the ability to kill prostate cancer cells while leaving healthy cells alone. The researchers now want to test this and other types of vitamin E in animals.

Contrary to the widely held, but mistaken belief that “nuts are fattening,” several population studies found that as nut consumption increased, body fat actually decreased. And clinical studies have confirmed that conclusion, finding that eating nuts actually resulted in lower weights. One study from Harvard School of Public Health discovered that people following a weight-loss diet that contained 35% of calories from fat, including pecans as a fat source, were able to keep weight off longer than people following a traditionally recommended lower fat diet. With their super nutrition profile and low-carb content, pecans also make a perfect choice for people following low-carb weight-loss plans. 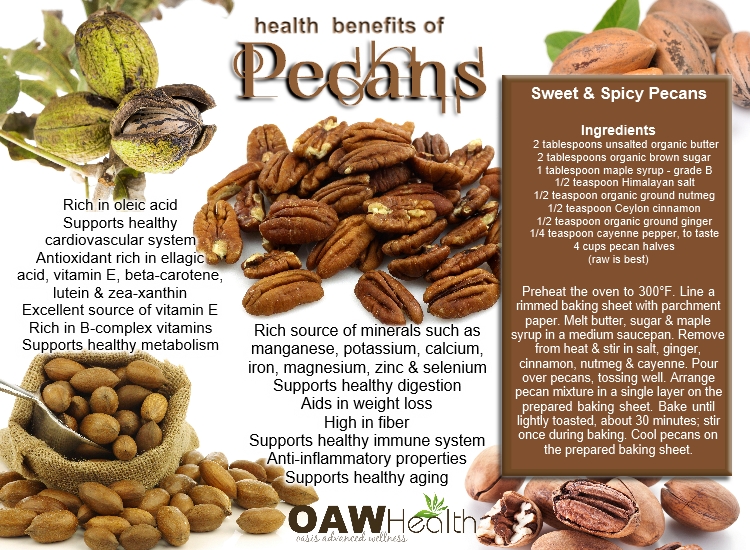 Pecans Instead of Meat

Pecans as well as other nuts count as meat servings in the Food Pyramid. This is mainly because pecans are high in protein and other important nutrients.

However, nuts contain more healthful types of fats than meat does as well as being cholesterol-free. In general, ½ ounce of nuts (10 pecan halves) can take the place of 1 ounce of meat in your diet. Though the recommended number of servings you should get from the meat (and beans) group varies depending upon your age, whether you’re male or female and how active you are, the average person should aim for 5 ½ daily servings from this group.

Because of research showing that the saturated fat found in meat can increase the risk for heart disease, the Pyramid recommends that you frequently choose nuts and beans over meat. That doesn’t mean you can’t have pecans as snacks; however, keep in mind that pecans and other nuts take the place of meat in your healthy diet.

Based on the results of these studies, adding pecans to a balanced diet may not only improve heart health, but also slow the effects of aging. As more research is done and more health benefits of pecan consumption documented, pecans should remain a popular nut choice among consumers. 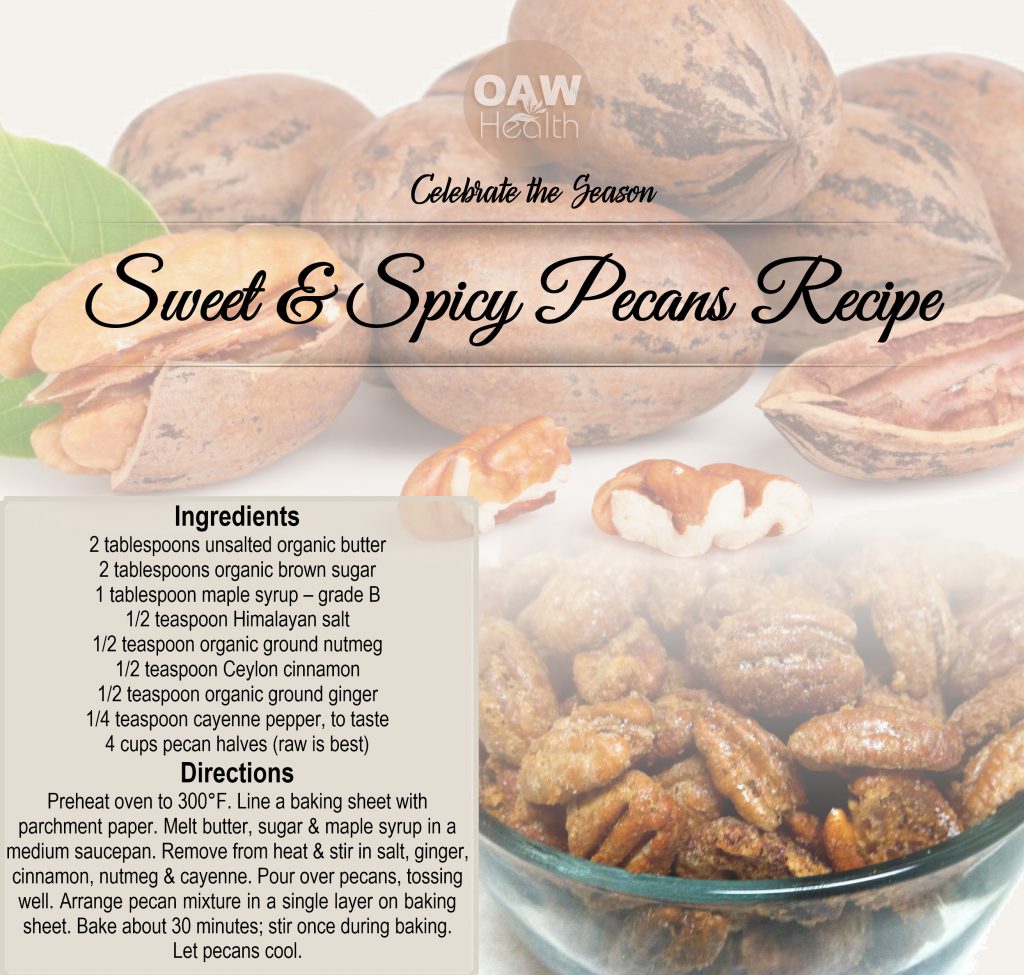 How to Store Pecans

Pecans retain their freshness, flavor, and nutrients with proper storage. Store pecans in an airtight container or freezer bags and you will have delicious treats all year round.

Storing pecans at room temperature is not recommended.