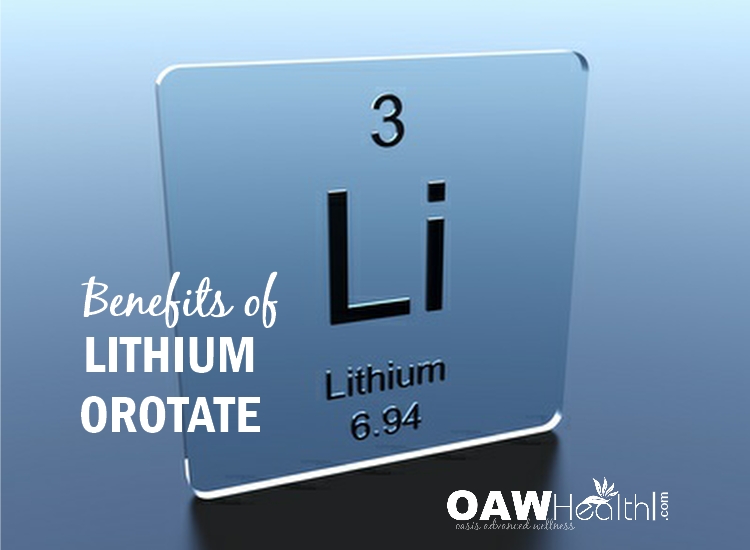 What comes to mind when you hear the words prescription lithium? Most people either think “mental illness” or about family/friends who have experienced the often worrisome side effects of pharmaceutical lithium carbonate. We’ve all heard the phrase “the dose makes the poison” and with lithium this is definitely the case. Let’s take a look at low dose lithium and the researched benefits of lithium orotate – a lesser known product. You may be surprised.

Lithium is a trace mineral much like sodium and potassium. It is a natural occurring mineral salt that we all need for optimal mental and physical health and is not a drug. The FDA approved lithium as a treatment for bipolar disorder in 1970. Unfortunately, as soon as the FDA approves a natural occurring nutrient for the treatment of a disease or health issue, it is forever referred to as a drug.

Lithium is classified as an essential micro-nutrient, meaning that all humans require lithium in small doses for optimum health.

DID YOU KNOW?
Lithium was the original “up” ingredient in 7-UP soda until 1950. The drink, which contained the compound lithium citrate, started selling  just two weeks before the stock market crashed in October 1929, kicking off the Great Depression.


Using data from 1978-1987, Schrauzer and Shrestha published a paper called “Lithium in Drinking Water and the Incidences of Crimes, Suicides, and Arrests Related to Drug Addictions.” They took information about the lithium level in the water of 27 counties in Texas. The results showed that counties with higher lithium levels in the water had a statistically significant decrease in the incidence of homicide, suicide, arrests for opiates and cocaine, and violent criminal behavior. It’s important to know that “higher lithium levels” translates to about 2mg of lithium a day. Pharmacologic psychiatric doses typically start at 300mg daily.

According to the 1989 paper: “Lithium has previously been used to control episodic outbreaks of rage among prisoners and in the management of drug abusers.  Animal experiments have demonstrated that lithium suppresses cocaine-induced super sensitivity…the kindling phenomenon following the chronic application of…a central nervous system stimulant, and head-twitching in response to the administration of mescaline.  Furthermore, lithium has been found to [improve] distractibility… and produce improvement of selective attention to stimuli… it prevents behavioral alterations owing to social isolation, lowers [aggressive behavior] owing to confinement…and causes a normalization of spontaneous motor activity.

What Are the Benefits of Lithium?

The benefits of lithium are many; in fact, lithium has been used as a mood stabilizer for decades. As said above, it’s usually in the form of lithium salts such as prescription high dose lithium carbonate or lithium citrate, but it’s also available in a non-prescription low-dose supplement form known as lithium orotate.

Clinical research tells us that the benefits of lithium are active in the following functions:

Other research also tells us lithium to be a key element in brain “healthy-aging” due to its ability to increase brain cell mass, which can also increase mental alertness and memory.

Orotates are defined as the mineral salts of orotic acid which is a natural substance found in the body and also in various foods including dairy products. Dr. Nieper, theorized many years ago that orotates are a component of a natural system of electrolyte carriers for distributing minerals throughout the body.

Based on Dr. Nieper’s observations of cells in culture, he concluded that molecules of calcium orotate and magnesium orotate can pass through cell membranes intact without “dissociating” or breaking apart into their component ions, and thereafter release their respective ions only at specific membrane sites within the cell. Subsequently Dr. Nieper extended this principle to include other orotates such as lithium orotate, potassium orotate and zinc orotate.

What is Lithium Orotate?

Lithium Orotate is the trace mineral lithium combined with orotic acid and was developed by the pioneering German physician, Dr. Hans Nieper. Dr. Nieper reported that just a small dose of 5 mg of elemental lithium in the form of orotate was roughly as effective as 100 mg of lithium in the form of carbonate, giving a 20-fold enhancement of potency thanks to efficient transport of the lithium by its orotate carrier.

Unlike its pharmaceutical counterparts, lithium orotate is non-toxic and is usually found effective for 70-80% of people who try it.

How Is Lithium Orotate Different From Prescription Lithium?

Lithium orotate likely causes fewer side effects because it contains much less lithium than its prescription counterparts.

It’s also important to understand how both prescription lithium carbonate and lithium orotate are taken.

Lithium Orotate has been shown to be three times more absorbed (more bioavailability) by brain cells. “…the 24 hour brain concentration of lithium after lithium orotate was approximately three times greater than that after lithium carbonate.” This allows for therapeutic servings of Lithium Orotate to be administered at least 1/3 of the amount of pharmaceutical lithium which brings the lithium levels down well below the toxic limits of lithium supplementation. 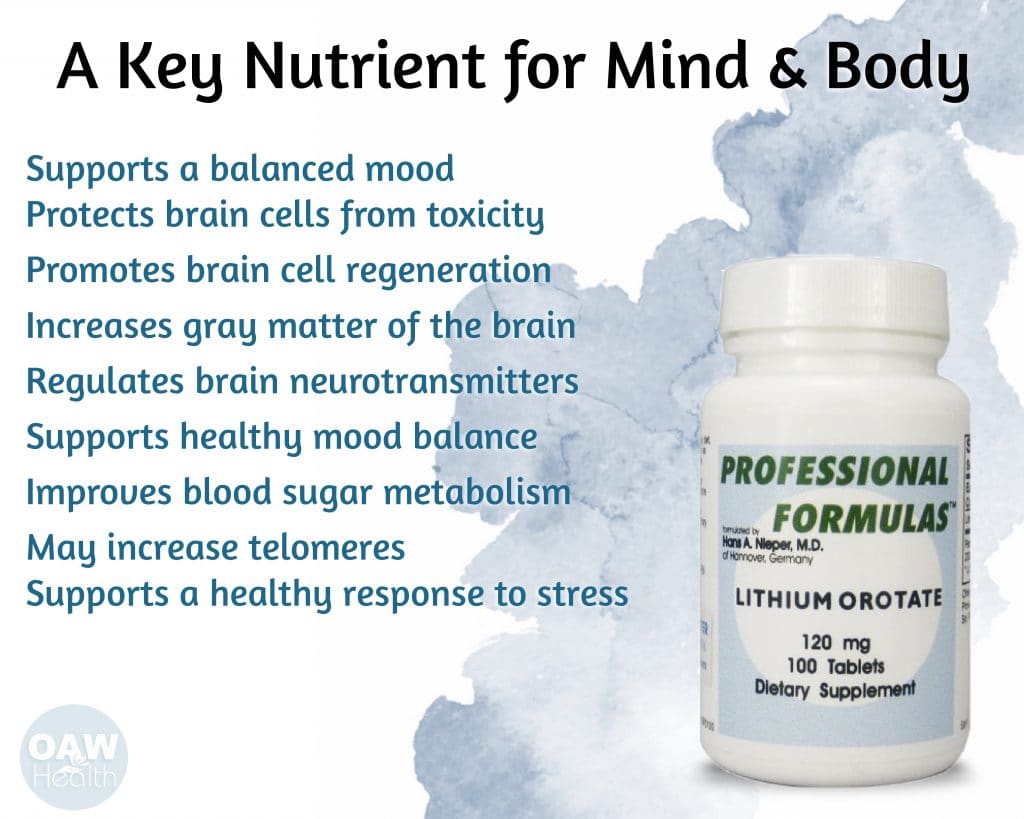 Other Health Benefits of Lithium Orotate

Based on research, Lithium carbonate (prescription lithium) should not be taken if you have Renal disease, have Cardiovascular disease, are severely ill, are pregnant, suffer from dehydration, take Diuretics, take ACE inhibitors, take beta-blockers or other anti-hypertension drugs, take insulin.

Although the warnings above appear to be true for pharmaceutical lithium compounds only and not for a modest serving of lithium orotate, it’s always wise to consult with a knowledgeable health care professional for anyone contemplating using lithium orotate concurrently with any medications.

Even though a recommended daily allowance (RDA) for lithium has never been established, a provisional RDA of 1 mg (milligram) daily for an adult weighing 70 kg (154 pounds) is established by most experts. It’s also important to note that the World Health Organization (WHO) in 1966 added lithium to its list of nutritionally essential trace elements, along with iodine, zinc, and other trace elements. Incorporating a bit more of this earth-sourced mineral may help in a better management of stress, a calming mood as well as support in boosting brain health and focus.

Taking low-dose supplemental amounts allow you to get the benefits of lithium orotate without the side effects that can come from taking higher doses. A Lithium Orotate supplement is a great way to integrate low-dose servings of lithium into your daily health routine.

Loretta Lanphier is a Naturopathic Practitioner (Traditional), Certified Clinical Nutritionist, Holistic Health Practitioner and Certified Clinical Herbalist as well as the CEO / Founder of Oasis Advanced Wellness in The Woodlands TX. She studies and performs extensive research in health science, natural hormone balancing, anti-aging techniques, nutrition, natural medicine, weight loss, herbal remedies, non-toxic cancer support and is actively involved in researching new natural health protocols and products. A 19 year stage 3 colon cancer survivor, Loretta is able to relate to both-sides-of-the-health-coin as patient and practitioner when it comes to health and wellness. “My passion is counseling others about what it takes to keep the whole body healthy using natural and non-toxic methods.” Read Loretta’s health testimony Cancer: The Path to Healing. Loretta is Contributor and Editor of the worldwide E-newsletter Advanced Health & Wellness.