Horseradish is a condiment that can definitely help keep you healthy. Using horseradish for medicinal purposes, whether to fight the flu and respiratory issues or combat tonsillitis and urinary tract infections has proven effective. Horseradish has been used to treat a wide variety of ailments over centuries, nearly every part of the horseradish plant has some medicinal value. Both in Biblical times and now, this bitter herb is used for Passover seders. Tea made from horseradish root can be used as an expectorant, while the tea brewed from its flowers can be used to battle the common cold. Even a poultice of horseradish roots can treat joint discomfort externally. The raw leaves of horseradish can be used as a natural analgesic and can lessen headache pain when pressed against the forehead. Last but not least, a horseradish infusion has known antibiotic properties, which have been proven effective against pathogenic fungi. And some believe that horseradish is nature’s next big antibiotic.

Horseradish is related to mustard, cabbage, and other cruciferous vegetables. Despite its long history as an all-around herbal remedy, perhaps horseradish’s most beneficial health benefit is being realized from recent studies of its anti-cancer effects.

Where Does Horseradish Get Its Name?

Does it really have to do with horses? The answer is yes, partly. Horseradish, the word, was first penned in the 1590s. It is said that the ‘horse’ was used symbolically to mean ‘strong’ and then pared with the word ‘radish’ to signify the root. Thus “strong root.”

Many believe the word “horseradish” originated in Central Europe, an area also associated with the most broadly held theory of how horseradish was named. In the German language, it’s called “meerrettich” (sea radish) because it is found growing by the sea. Others believe the English mispronounced the German word “meer” and began calling it “mareradish,” which became known as horseradish.

In America, commercial cultivation of horseradish started in the mid-1850s, when immigrants began horseradish farms in the Midwest. In the late 1890s, a flourishing horseradish industry developed in a region of very fertile soil on the Illinois side of the Mississippi River. Currently, almost 6 million gallons of prepared horseradish are produced yearly in the U.S.A. — basically, enough to season enough sandwiches to wrap 12 times around the world!

Horseradish contains significant amounts of glucosinolates, cancer-fighting compounds that increase the liver’s ability to detoxify carcinogens and possibly suppress tumor growth. Horseradish is related to broccoli. Many studies have praised the organosulfur, chemoprotective glucosinolates in broccoli, especially in broccoli sprouts, but horseradish contains the same amount 10 times over!

Glucosinolates are credited for the characteristic hot taste of horseradish, wasabi, and mustard. Two of the most plentiful compounds in the horseradish root are sinigrin and gluconasturtiin. Once they are inside the body, glucosinolates are broken down into dynamic derivatives called isothiocyanates and indoles, which are believed to be the main cancer-preventive contributors of horseradish and other cruciferous vegetables.

In Scotland, the University of Dundee published a study suggesting a possible anticancer mechanism of action for the glucosinolates found in horseradish and other plants in the Brassica family. They found that isothiocyanates and indoles can activate cancer-protective genes by inducing specialized transcription factors and inactivating the proinflammatory mediator nuclear factor-kappa B. Isothiocyanates and indoles are also able to affect cell-cycle arrest and stimulate apoptosis.

Horseradish root extracted juice or sauce has been used effectively to help sinus issues. The traditional treatment for sinusitis consists of “taking a half teaspoonful of grated horseradish sauce without dilution both morning and afternoon.” Do not drink or eat anything for at least ten minutes after the dose. There will be a robust feeling in the head, followed by a sensation of the sinuses clearing, sometimes accompanied by sweating and perhaps tearing.

The activation of cancer-fighting compounds found in horseradish roots has now been documented.

Researchers from the University of Illinois College of Agricultural, Consumer, and Environmental Sciences (ACES) demonstrated that compounds found in horseradish, called glucosinolates, may help detoxify and eliminate cancer-causing free radicals.

“Glucosinolates increase the liver’s ability to detoxify carcinogens and they may actually suppress the growth of existing cancerous tumors. Our analysis of various horseradish varieties shows they are a rich source of these compounds…We knew horseradish had health benefits, but in this study, we were able to link it to the activation of certain detoxifying enzymes for the first time,” said researcher Mosbah Kushad, one of the study’s co-authors.

This particular study looked for the products of glucosinolate hydrolysis — responsible for activating the enzymes involved in the detoxification process of cancer-causing molecules.

The USDA categorizes fresh market horseradish based on the length and diameter of the root as US Fancy, US No.1, or US No.2. Using this rating system, researchers compared the quantity and activity of the products found in 11 horseradish strains.

“There was no information on whether the USDA grade of the horseradish root is associated with cancer preventive activity, so we wanted to test that,” Kushad said.

The study results indicate that the strains found in the higher-grade US Fancy category have significantly more glucosinolates than US No.1.

The concentration of the different glucosinolate hydrolysis products varied based on the USDA grade. The US Fancy had greater allylisothiocyanate (AITC), while US No.1 had greater 1-cyano 2,3-epithiopropane (CETP). CETP is a comparatively weaker cancer-fighter than AITC; however, the detection of CETP in horseradish is still notable, said the researchers.

“To our knowledge, this is the first detection and measurement of CETP from horseradish,” Kushad said.

Since AITC activates the glucosinolate hydrolysis enzymes responsible for detoxifying the cancer-causing molecules, and about 90% of it is absorbed when ingested, researchers propose that horseradish is a good dietary anti-carcinogen.

“No one is going to eat a pound of horseradish,” Kushad said. “Luckily, a teaspoon of the pungent condiment is sufficient to get the benefit.”

Horseradish also has antibiotic properties, which can treat urinary tract infections (UTI) and destroy bacteria in the throat that can cause bronchitis, coughs, and related issues. It’s interesting to note that the German Commission E (German equivalent of the FDA) has approved horseradish as an adjunct treatment to prescription drugs for UTIs. The theory is that chemicals in horseradish concentrate in the urine and deliver antibiotic effects to the bladder. They may also activate specific enzymes that help to keep toxins from accumulating in the bladder. Additionally, horseradish stimulates the body to eliminate urine, so bacteria or other inflammatory agents in the bladder may be flushed out sooner than they normally would be eliminated.

One of the most powerful glycosides found in horseradish, sinigrin, has been found to relieve the symptoms of water retention due to its stimulating effect on the blood capillaries. Horseradish is rubefacient, an agent that stimulates blood flow below and to the surface of the skin. As such, this action makes the herb effective in poultices and as a very effective liniment or massaging agent to relieve muscular aches and pains, painful arthritic and rheumatic joints, and chronic rheumatism. As an external rub, horseradish has been used to relieve chest congestion. The German Commission E also recommends external use of horseradish for respiratory tract congestion and minor muscle aches.

In addition to their potential uses as an anti-cancer drug, the glucosinolate compounds derived from horseradish may have another exciting health benefit. In botanical physiology, glucosinolates protect the plant from toxic or harsh environments.

Recent studies have indicated that they may have the same potential to protect humans from the effects of exposure to toxic chemicals in our environment. A Russian study set out to test the anti-mutagenic properties of a plant extract derived from horseradish. The studied plant extracts and their mixture demonstrate the ability to decrease the genotoxicity of environmental mutagens. 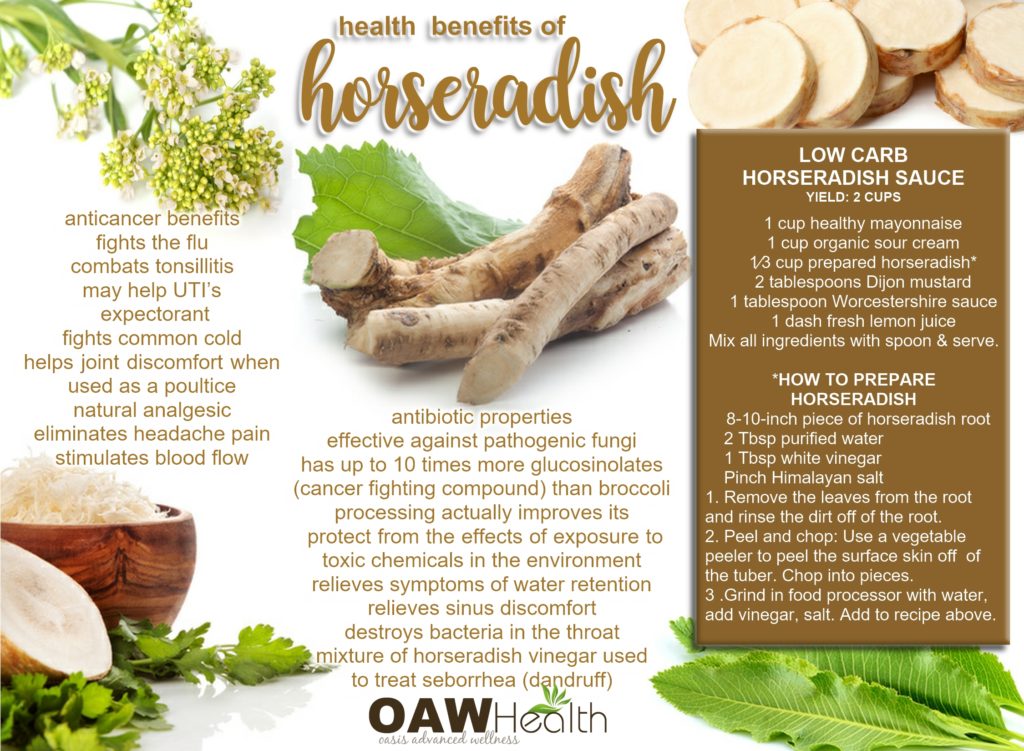 Food as Medicine — Well, Of Course!

Over and over, we find that Hippocrates was correct! When we look at all the powerful compounds, enzymes, nutrients, and minerals in food, such as horseradish, and find they really can improve our health for the better, we quickly realize that food can absolutely be our medicine just as medicine can be our food.

Loretta Lanphier is a Naturopath Practitioner, Board Certified Traditional Naturopath, Certified Clinical Nutritionist, Holistic Health Practitioner, and Certified Clinical Herbalist as well as the CEO / Founder of Oasis Advanced Wellness in The Woodlands TX. She has studied and performed extensive research in health science, natural hormone balancing, anti-aging techniques, nutrition, natural medicine, weight loss, herbal remedies, non-toxic cancer support and is actively involved in researching new natural health protocols and products. A 20-year stage 3 colon cancer survivor, Loretta can relate to both sides-of-the-health-coin as patient and practitioner regarding health and wellness. “My passion is counseling others about what it takes to keep the whole body healthy using natural and non-toxic methods.” Read Loretta’s health testimony Cancer: The Path to Healing. Loretta is a Contributor and Editor of the worldwide E-newsletter Advanced Health & Wellness. Check out Oasis Advanced Wellness and our natural skin care products, Oasis Serene Botanicals.

†Results may vary. Information and statements made are for education purposes and are not intended to replace your doctor’s advice. Oasis Advanced Wellness/OAWHealth does not dispense medical advice, prescribe, or diagnose illness. The views and nutritional advice expressed by Oasis Advanced Wellness/OAWHealth are not intended to be a substitute for conventional medical service. If you have a severe medical condition or health concern, see your physician of choice.