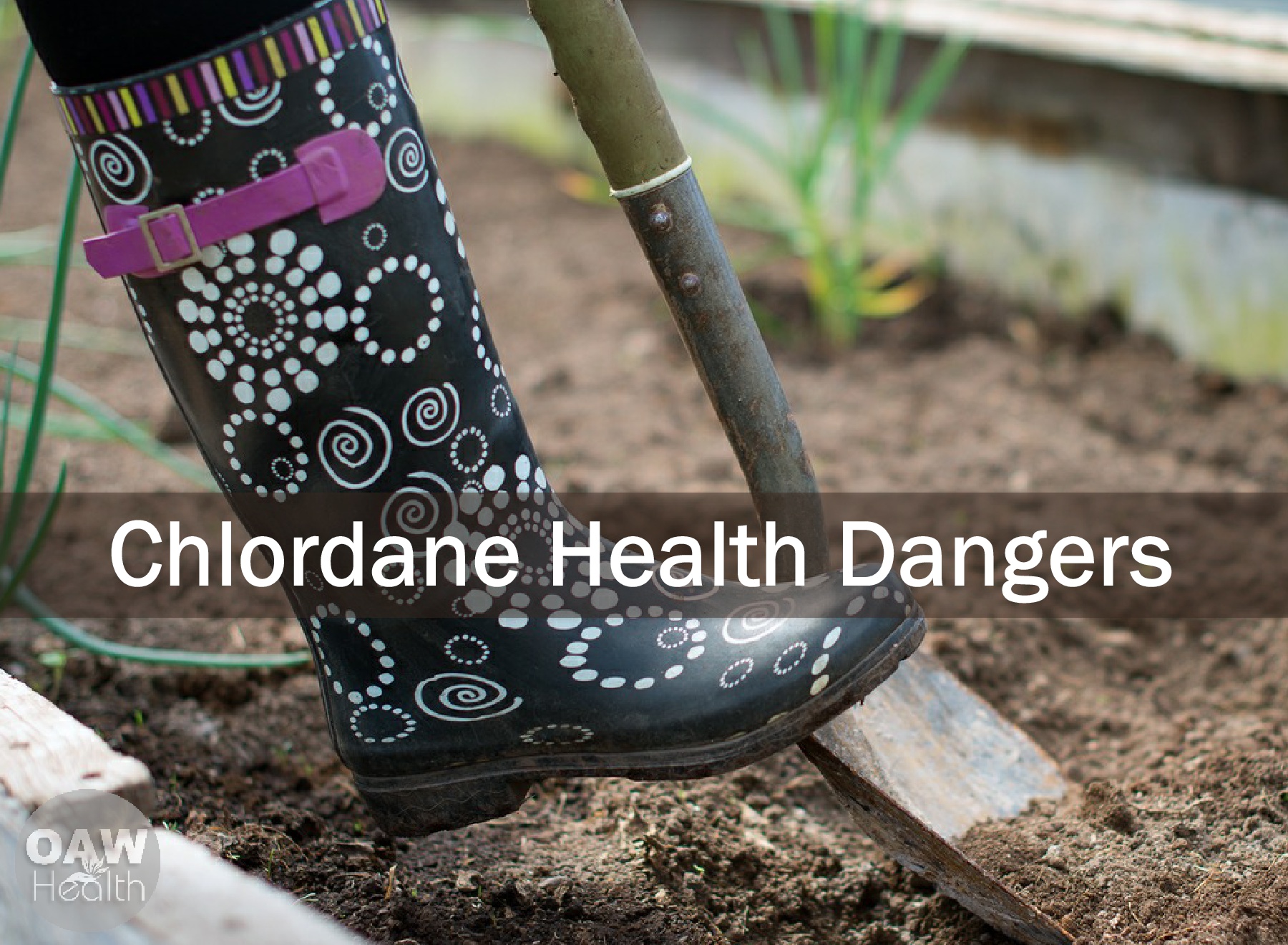 A popular broad-spectrum pesticide and man-made chemical, chlordane was sold in the United States from 1948-1988. It was actually introduced to the US in 1947 as an insecticide to control termites and pests on field crops. The U.S. Environmental Protection Agency legally prohibited the use of chlordane in 1983, except for controlling termites, because of issues and concerns related to environmental damage and the health risks to humans. USEPA has determined that over 30 MILLION homes and MILLIONS of acres of cropland were treated with chlordane. Banned for all uses in 1988, its effect is still felt not only in the USA but throughout the entire world. Although chlordane can still be used commercially to control fire ants in power transformers in the United States, there are no products currently registered for this use. Unfortunately chlordane health dangers still abound.

Even though chlordane was banned over 30 years ago, the exposure risk and dangers still abound. Chlordane is a persistent organic pollutant with the emphasis on “persistent.” It doesn’t occur naturally nor does it decompose quickly, it just lingers. Chlordane fiercely adheres to and pollutes soil particles and as such it is unlikely to enter groundwater. It’s important to know that if you’ve been to homes or lived in homes treated for termites before 1988, a very good chance exists that chlordane was used. If you were alive when chlordane use was at its peak use, the probably of your exposure is high as is your risk for chlordane health dangers.

Chlordane Health Dangers: Still Among Us

Persistent organic pollutants (POP’s), such as chlordane, have had negative effects and polluted almost the entire world. According to the University of Hong Kong Department of Community Medicine remnants of persistent organic pollutants have been found in human breast milk in the region. In fact, the Chinese Academy of Sciences has warned that the amount of POP’s found in the water supplies in China may pose very real health concerns to humans. This is something everyone should really think about before purchasing any herbs or supplements that are produced overseas.

Unfortunately, chlordane is still polluting the USA environment. Soil samples examined by The University of Iowa showed that Cedar Rapids Iowa had chlordane soil contamination almost as serious as urban areas of China. Even more concerning is the fact that a U.S. Geological Survey found chlordane contamination in samples of soil from Yosemite National Park.

This natural cycle of Pacific Northwest salmon migration to spawn has been going on forever. This migration process is known for the ability to transport chemicals. According to the University of Saskatchewan when fish are contaminated with persistent organic pollutants and die, which they all do, the decomposition of their bodies release the stored chemicals and contaminate the environment even further.

As concerning, researchers at the University of Hawaii researchers discovered concentrations of POP’s, including chlordane, in the blubber of the endangered Hawaiian seal monk.

Is Chlordane a Carcinogen?

EPA has classified chlordane as a Group B2, probable human carcinogen. Animal studies have reported liver cancer in mice and male rats exposed to chlordane via ingestion. An occupational study reported an association between chlordane exposure and non-Hodgkins’s lymphoma, while other human studies did not show an association between chlordane exposure and leukemia or multiple myeloma.  Currently, exposure to chlordane appears is highest for those persons living in homes that were treated for termites with chlordane. Chlordane may also be found in the air in these homes for many years after treatment.


Chlordane is a potent neurotoxin and animal carcinogen. Neuropsychological dysfunction and emotional distress were observed in 10 individuals exposed to chlordane pesticide after their homes were treated for termites. Cognitive deficits ranged from mild to moderate on tasks requiring speeded processing, problem solving, and delayed memory. Somatization, hysterical features, and depression dominated the clinical picture. Current results implicate the hazards associated with chlordane treatment of residential homes and the continued need for further studies. (r)

Studies find that organochlorine insecticides such as chlordane are associated with diabetes or insulin level issues. The results of four published studies reveal that the real risk factor is the insecticides present in fat. The initial investigations showed that the expected association between obesity and diabetes/insulin resistance was absent in people who had low levels of organochlorine insecticides in their blood. However, the expected association between obesity and diabetes/insulin resistance increased with levels of these insecticides. In the last year, two additional studies have linked these insecticides with diabetes. In all four studies, the insecticides that consistently had the greatest association with diabetes were compounds of the chlordane family (oxychlordane, trans-chlordane, trans-nanochlor, and heptathlon), all of which are found in technical chlordane.

Chlordane is also a suspected endocrine disruptor; that is, it can interfere with animal hormones. Chlordane can also cause infertility in both men and women. In 2003, tests for hormone disrupting chemicals conducted in Cape Cod, Massachusetts detected chlordane, heptachlor, or dieldrin in the air of 50-60% of the homes with levels 4-40 times the US Environmental Protection Agency (USEPA) risk-based guidelines for ambient air. Since termite infestation and treatment increase in warmer climates, these numbers would increase with homes located farther south. Another study indicates that women with higher chlordane blood levels experience symptoms of menopause, on average, over 5 years earlier than normal. (r)

Chlordane has the ability to…

The ban of chlordane did not take place until over 30 million US homes were already treated. Concerns in places such as Florida are even greater because of the increased termite concern and the fact that research shows chlordane is higher in homes built on sandy soils.

Most homeowners of older homes are unaware that just before pouring the concrete slab for their home’s foundation, a pesticide company came in and saturated the soil with 100 gallons of chlordane per 1000 square feet of area. People were literally building their homes on top of a toxic chemical dump. The pesticide industry and entomologists reassured the public that this was a safe procedure and that the chemical would not enter into the home because of the barrier provided by the cement foundation. However, this turned out to be false.

Homes treated 20-30 years ago with chlordane are still showing unsafe levels of chlordane in the indoor air. The concern occurs because the hundreds of gallons of chlordane underneath the home are slowly evaporating, rising through cracks in the foundation or around plumbing pipes and entering the home. One of the first studies to find there was a definite concern came in the 1970’s when the U.S. Air Force randomly tested over 500 apartments and housing units of its airmen. Results indicated approximately 75% of the units tested contained chlordane in the air and over 5% were above the National Academy of Sciences “safety guidelines” of 5 micrograms per cubic meter of air.

Further studies by the New Jersey Department of Environmental Regulation and other agencies found similar results in hundreds of homes in New Jersey and New York. Of great concern, when testing 64 homes built before 1980, researchers found more than 30% of the homes contained chlordane levels above the 5 microgram safety limit set by the National Academy of Sciences.

How to Reduce Chlordane Exposure

Because of chlordane’s persistent pollutant status, the USA is still paying the price for the era when chlordane was praised and literally dumped all over the country. In fact, you can even ingest chlordane-contaminated food. How? When food is grown, the soils likely still have chlordane in them from when it was commonly used way back in the 70’s (or earlier). Many Americans still exhibit low levels of chlordane in their body fat, which can definitely remain for a long time. There are tests that can determine if you have chlordane in your body (or in the soil around your home), but these tests are unable to tell you when the exposure occurred and what health effects may result. The good news is there are steps you can take to lower any future exposure.

Eat organically produced foods such as

Also, be very careful when digging near and around the foundation of older homes that may have been treated for termites before 1988. Be extremely careful about allowing children to play in any soil that may has the possibility of being treated with chlordane.

How To Remove Chlordane From Your Home

The following info is from Dr. Richard Cassidy, Ph.D.

Two ways to remove these chlordane vapors from the air in your home is by ventilation with outside air or filtering indoor air through activated charcoal. Most major heating/air conditioning manufactures offer heat-exchange ventilation system that can be easily interfaced to your current ducting system. I have tested homes before and after such installation and have found at least a 10-fold reduction in the levels of insecticides.

For persons living in chlordane/heptachlor and/or aldrin/dieldrin treated homes, breathing these insecticides has the potential of causing greater adverse health effects than other more widely publicized pollutants. For more information on health effects and air testing see (www.toxfree.net). Dr. Cassidy provides free consulting and would be happy to answer your questions.


Even though, over time, chlordane concentrations are likely lessening in the environment, be aware that because we live in a chemical soup of toxins, we constantly come into contact with this dangerous chemical and chemicals similar to chlordane in toxicity. It’s very concerning that when current random samples are taken, chlordane concentration shows up in every single one. It’s even more concerning that this pesky chemical likes to build up in our body fat. Be careful when using any pesticides around your home. Many man-made pesticides can have long-lasting effects on your health. Better yet, check out organic and natural pesticides rather than toxic synthetic pesticides for your home, lawn and garden needs. Bottom line…let’s just be kind to our planet and our health.

Loretta Lanphier is a Naturopathic Practitioner (Traditional), Certified Clinical Nutritionist, Holistic Health Practitioner and Certified Clinical Herbalist as well as the CEO / Founder of Oasis Advanced Wellness in The Woodlands TX. She studies and performs extensive research in health science, natural hormone balancing, anti-aging techniques, nutrition, natural medicine, weight loss, herbal remedies, non-toxic cancer support and is actively involved in researching new natural health protocols and products. A 17 year stage 3 colon cancer survivor, Loretta is able to relate to both-sides-of-the-health-coin as patient and practitioner when it comes to health and wellness. “My passion is counseling others about what it takes to keep the whole body healthy using natural and non-toxic methods.” Read Loretta’s health testimony Cancer: The Path to Healing. Loretta is Contributor and Editor of the worldwide E-newsletter Advanced Health & Wellness.