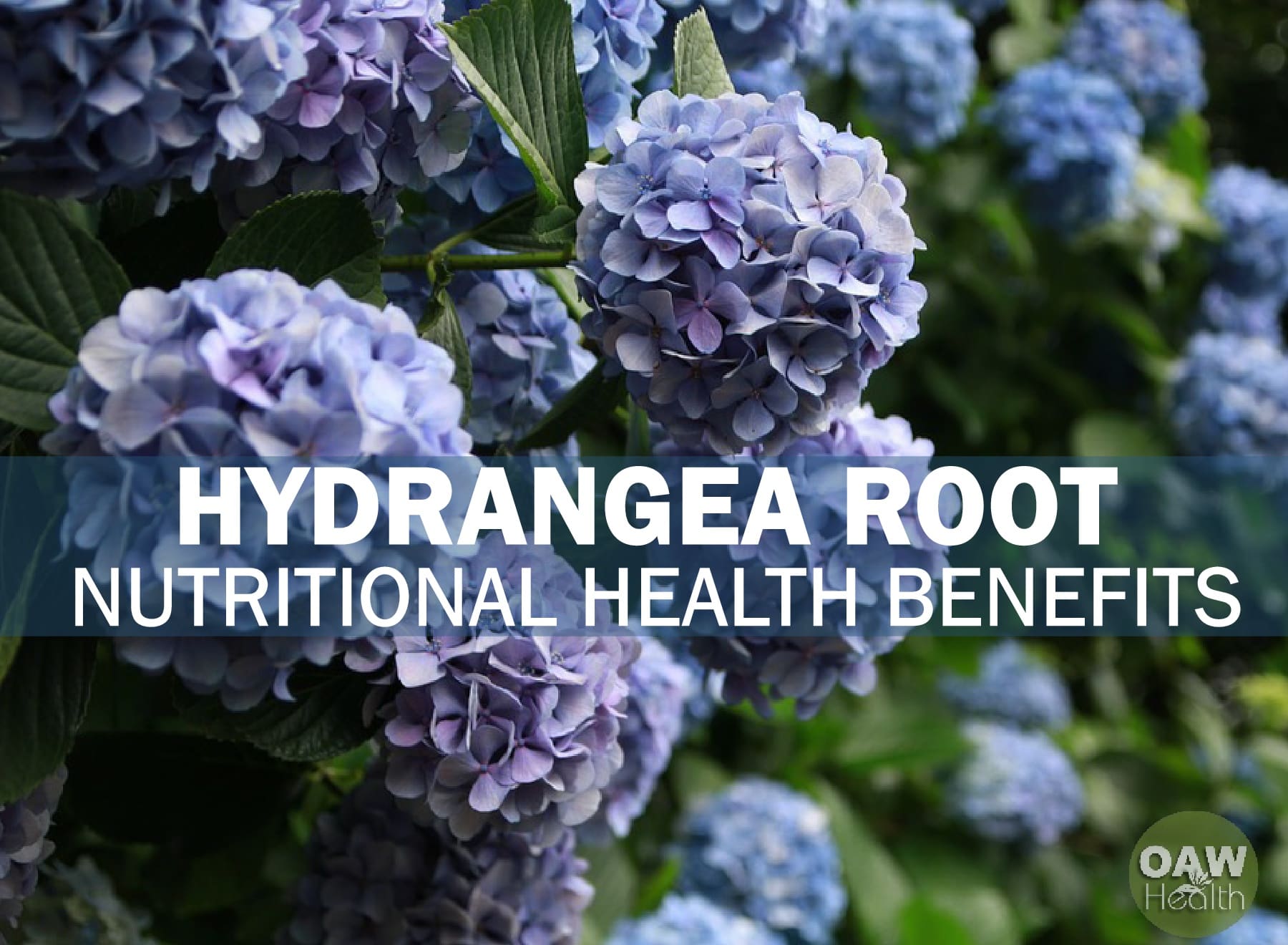 I just adore hydrangea plants — mainly for their daintiness, but also for their large beautiful clusters of blue, pink, white and purple flowers. I’m happy to say we currently have three hydrangea plants growing in our backyard – every so slowly, but thriving. What makes me actually love them is knowing that the hydrangea root provides some great nutritional health benefits. Unfortunately, while hydrangeas will grow in Texas, they require a high level of attention in order to survive our hot Texas summers.

The beautiful hydrangea plant is aquatic and can grow up to 9 feet tall. The name hydrangea means water-vessel in Greek and is also known as “seven bark” in reference to the many variously colored layers that enclose its root.

The parts of the hydrangea plant used medicinally are the dried root, rhizome and leaves.

The parts of the hydrangea plant used medicinally are the dried root, rhizome, and leaves. Used for hundreds of years in folk medicine by the Cherokee Native Americans and colonial era settlers, hydrangea root was used for the treatment of urinary tract infections in the bladder and kidneys, wounds, prostate disorders and other health concerns.

Hydrangea is a lithotrophic, diuretic, and tonic herb. Lithotrophic herbs are known for their action against stones. As a diuretic, hydrangea may help increase urine flow. Traditional healers have long-credited hydrangea in its support of kidney function by helping waste removal and hormone secretion.

Historically, hydrangea was used in various ways. Published research shows that this plant’s nutritional health benefits include the following.

A study published in Evidence-Based Complementary and Alternative Medicine notes that coumarins found in hydrangea paniculata helped improve renal function and reduce renal oxidative stress in mice. The Journal of the American Herbalists Guild states that the root bark from hydrangea arborescens is an impressive analgesic for people who experience urinary tract pain. Also, Hydrangea root contains a naturally occurring phytochemical, hydragin, which is most likely the main constituent that makes the hydrangea plant useful against kidney stones.

Results from a 2017 study indicate that compounds found in hydrangea macrophylla (HM) have hepatoprotective properties. According to researchers, sodium arsenite (NaAsO2) is a ubiquitous environmental stressor that has become a danger to human and animal health. Long-term exposure to arsenic compounds has been directly related to major health concerns such as hepatitis, hepatic cancer, diabetes, coronary disease, stroke, peripheral vascular disease, and skin disease. Among them, the liver is the most targeted site for arsenic toxicity due to its physiology, particularly for biochemical alteration of arsenic metabolites. HM is a natural phytomedicine that is seemingly a promising therapeutic agent for treatment of hepatic disorders by targeting oxidative stress.

According to Doctor’s Guide, there are a significant number of autoimmune conditions hydrangea may have the ability to treat including multiple sclerosis, lupus and rheumatoid arthritis.

Hydrangea root tea contains a substance known as halofuginone. Research shows halofuginone has the ability to treat autoimmune disorders. Halofuginones can stop the over-production of Th17 cells, which may be the underlying cause behind the weak response of the immune system.  Halofuginones are able to accomplish this without disrupting the rest of the immune system unlike other medicines that have been tried. According to Doctor’s Guide, there are a significant number of autoimmune conditions hydrangea may have the ability to treat including multiple sclerosis, lupus and rheumatoid arthritis.

Teas, syrups and extracts are often used to derive the health benefits of the hydrangea root. Some forms of hydrangea are toxic; however, certain teas, sweet in flavor, can be made from specific species of hydrangea.

There are also many tinctures available containing hydrangea root along with other herbal extracts for kidney health, such as gravel root, chanca piedra, uva ursi, marchmallow and dandelion.

Please use caution when using hydrangea. Hydrangea may add to the effects of blood sugar balancing, anti-fungal, anti-malarial, antihistamine and cholesterol-lowering drugs, and drugs taken to prevent. Pregnant or breastfeeding women should not use hydrangea root medicinally. Before using hydrangea, discuss hydrangea treatment with a knowledgeable health practitioner.

Noted as an elegant plant and shrub, there are four varieties of hydrangea grown in North America. The garden varieties, hydrangea macrophylla and hydrangea paniculata, are native to China and Japan and are those most often seen throughout the gardens of the world.

As with all herbs, they tend to lose their medicinal qualities as they are hybridized for ornamental purposes. So do not use your garden-variety hydrangea as an herbal tea and expect to get any results other than a sore stomach.

Journal of the American Herbalists Guild, “Herbal and Nutritional Treatment of Kidney Stones”