As the number of baby-boomers who reach retirement continues to grow, an eye disease called macular degeneration – or age-related macular degeneration (AMD) –
is an ever-increasing health issue for millions of people. In fact, AMD
is statistically found in nearly one-third of American adults over the
age of 65, and is the leading cause of blindness in this age group.
Scientists are predicting a whopping 18 million cases of AMD by the year
2050, and until recently, this disease was thought to be incurable and
irreversible. However, researchers have recently conducted studies that
indicate great hope for preventing and potentially healing AMD through
the use of supplementation with bioidentical hormones.

AMD is literally deterioration of a part of the eye, located in the center of the retina, called the macula. The retina is a critical part of the eye that is composed of millions of specialized structures known as photoreceptors
that capture light as they receive signals from the brain via the optic
nerve and convert these signals into images. AMD most often occurs when
tiny yellow particles made of cholesterol called drusen begin to collect at the back of the eye and damage the macula and the photoreceptors. This type of AMD is called dry macular degeneration, and is by far the most common, accounting for about 90% of cases. Wet macular degeneration
is the result of tiny blood vessels that grow abnormally in the retina
and leak, causing damage and potentially rapid and irreversible
blindness. Wet AMD always begins as dry, and progresses into wet,
although not all cases of dry will turn into wet. AMD causes loss in the
center of your vision, while peripheral vision is not affected. For
many years, drusen have been identified as the culprit in AMD, and
researchers thought they were probably the result of inflammation,
cellular waste product, or reduction in blood flow to the retinal area
due to aging.
Certain risk factors for AMD have
been identified as well. These include smoking, a high fat diet,
obesity, insufficient physical exercise, high blood pressure, family
history, and others. If these risk factors sound a lot like those for
cardiovascular disease, it is because they are identical. What’s the
connection with heart disease? One word: Hormones. 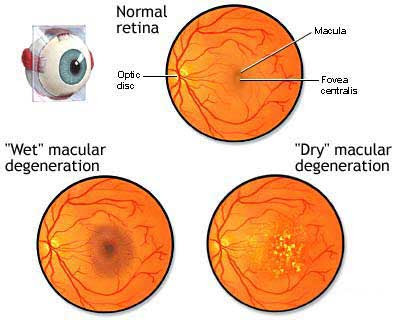 How Can Bioidentical Hormone Therapy Help With AMD?

An exciting discovery was made about 10 years ago that is a boone for
the care of AMD and for the overall understanding of hormone therapy.
Researchers conducted several studies that led them to conclude that AMD
can be prevented, and even reversed in some cases, by the use of bioidentical hormones.
This journey began when cholesterol was pinpointed as the main
ingredient in drusen, and the link between macular degeneration and
cardiovascular disease was factored in. This link is very clear. In
fact, it is estimated that a person with AMD has 5 times the chance of
dying from coronary disease and 10x the chance of dying from a stroke
than individuals without AMD. This led researchers to speculate that
drusen form because the retina is trying to compensate for a lack of
critical hormones in the blood by making its own. When it is unable to
accomplish that, drusen (cholesterol) increases, causing AMD and increasing risk for cardiac disease.

The theory turned out to be correct, and it has been proven in clinical studies that supplementation with bioidentical hormones
— not synthetic ones — has significant healing effects on both AMD and
heart disease. These hormones include: dhea, progesterone, testosterone,
pregnenolone, and others.
The retina is technically part of
the brain, as an extension of the optic nerve, and hormones such as
pregnenolone, estrogen, and progesterone are critical for proper brain and nervous system functioning. Dhea is also important in preventing AMD and heart disease.


What Else Can Help Prevent AMD?


While hormone therapy has the
most significant effect, certain other substances have also proven
therapy themselves to be useful for treating and preventing AMD. These
include:

The discovery of hormonal links to AMD has
reinforced the concept that proper hormonal balance, and the use of
supplemental bioidentical hormones, plays a major role in wellness and
disease prevention of all types.