intraMIN™ 100% Organic! A 100% carbon-bond liquid microcomplexed™ trace mineral supplement. Lack of organic minerals has been shown to be the cause for many illnesses and ailments. intraMIN™ contains 72+ trace minerals that are 100% Organic, super hypo-allergenic, drug free, and preservative free. †Results may vary.

intraMIN™ is the only pure trace mineral supplement that is fueled by intraCELL™ Technology. This rapid absorption and ultra-chelated 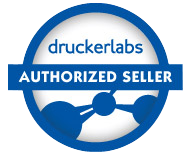 (ultra-tiny) formulation provides rapid and near perfect infusion of necessary minerals to cells.

Organic Trace Minerals are true 100% organic minerals containing carbon. When we use the word “organic” we are not referring to the common commercial use of the word “organic” which means produced without the use of toxic chemicals, pesticides, etc. We are referring to the more important and true scientific connotation of the word “organic” which means containing “living carbon” not dead, synthetic, toxic carbonate.  After years of testing, it has been determined most trace mineral products do not contain sufficient quantities of true organics to sustain our bodies.

Fulvic acid is the end product of nature’s decomposition process. Fulvic acid contains most of the phytochemical protective (anti-aging / antioxidant) nutrients and substances from the original living organic plant matter. Even the smallest strands of RNA, DNA and organic plant photosynthetic material remain intact. Over time, the original components become organically complexed and enriched with metalo-enzymes and other critical organic material.

Fulvic acid is proven to have numerous unique capabilities for essential intra-cellular detoxification functions even when applied topically.  Because fulvic acid is so highly refined and  naturally chelated, it consists of 100% organically complexed and ultra-tiny molecules which easily penetrate human tissues and cells.

Fulvic acid is simply nature’s most precious form of protection and defense for plants, animals, and even mankind.  Unquestionably, it is tied closely to immune system functions and has exceptionally powerful antioxidant (anti-aging) qualities. 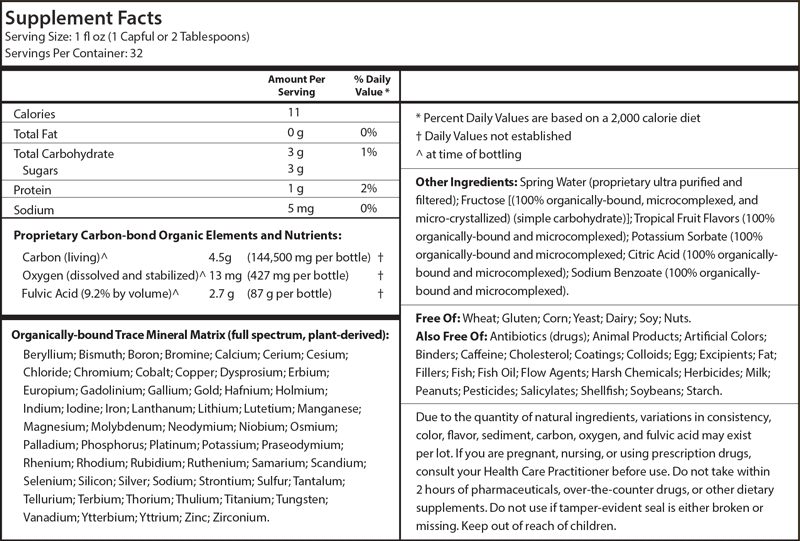 intraMIN™ should be used as the first line of choice for health care issues that require minerals only until stabilized.  It is best to remove all other kinds of nutritional supplementation and focus only on intraMIN™.  Once health concerns are controlled or are better, it is then desirable to to intraMAX™ which is a base of  intraMIN™ with the addition of a complete daily vitamin and nutrient supplement.

Shake well and refrigerate after opening. Best used on an empty stomach.

Adults: Take 1 fluid oz. daily (1/2 fluid oz. in the morning and 1/2 fluid oz. in the evening). Always follow with 8-10 fluid oz. of filtered, non-chlorinated, or bottled water. Do not take within 2 hours of pharmaceuticals, nutraceuticals, or over the counter medications. Not recommended after 6:00pm. Use as directed or consult your health care provider.

Due to the quantity of natural ingredients, variations in consistency, color, flavor, sediment, carbon, oxygen, and fulvic acid may exist per lot. If you are pregnant, nursing, or using prescription drugs, consult your health care practitioner before use. Do not use if tamper evident seal is either broken or missing. Keep out of reach of children.

Why do I need organic minerals?

Without organic trace minerals as a carrier, vitamins and other nutrients are not as effective. Cells cease to function, the immune system weakens, the nervous system deteriorates and the body begins to age more rapidly.

Do I get enough nutrients and minerals from my food?

No. “99% of Americans are deficient in organic minerals because inorganic toxic chemicals, pesticides and herbicides have destroyed nearly all the critical organic minerals, elements, and complexes in our soils.

Do I get organic minerals and nutrients in most multi-vitamins?

No. The question really is, will your body absorb and utilize those found in most products? Only a small percentage most minerals and vitamins in commercial products are absorbed by your cells.”† This is because they are mostly inorganic (synthetic, dead, toxic), which means these non-absorbable synthetic minerals and elements are generally too large to effectively penetrate cell walls. Therefore, inorganic elements and minerals are of little or no benefit.  Moreover, many doctors believe inorganic elements and minerals (i.e. colloidal minerals, coral liquids, etc.) may in fact accumulate in our extra-cellular tissue causing toxicity.

What should health care professionals know about IntraMIN®?

Drucker Labs recommends that IntraMIN® should be the first choice when a clients's health care issues require minerals. It is best to remove all other kinds of nutritional supplementation and focus only on intraMIN®. Once the client begins to manifest degrees of healing based upon clinical evaluations, it is then desirable to switch to intraMAX®, which has a base of intraMIN®, with the addition of a complete daily vitamin and nutrient supplement.

There are no reviews yet.

Be the first to review “intraMIN” Cancel reply