What You Definitely Need to Know About GMOs 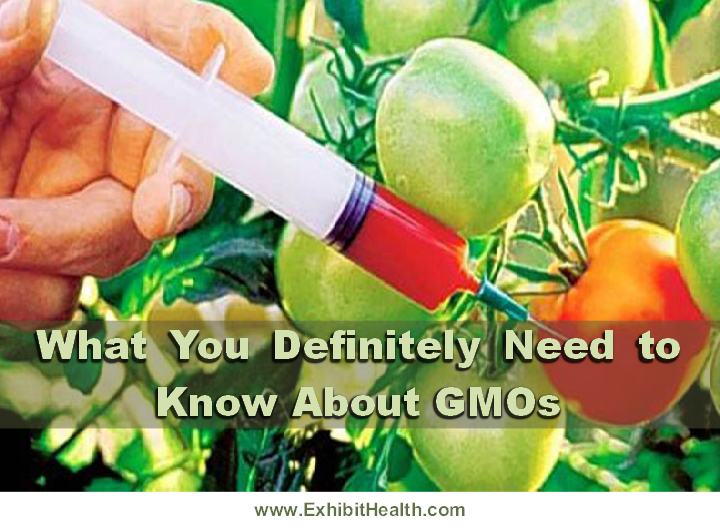 A while back we posted to the Oasis Advanced Wellness Facebook page a graphic concerning GMOs. To my surprise we had a couple of posts asking “What are GMOs?”  I admit that this question made me take pause. Obviously there are people who have no idea what GMOs are or why the concern about GMOs. It was then that I realized that the most important thing I could do was to educate and make sure that people understand about GMOs and why they are dangerous to our food supply and to our health.

GMO stands for genetically modified organism. GMOs are bacteria, viral genes, plants or animals created by gene-splicing technologies that alter the DNA of a species by introducing DNA from other microbes, plants and animals and/or pesticidal genes into the organism, creating unstable cellular structures that do not occur in nature. By denaturing an organism through modification, genetic engineering companies became legally capable of patenting their inventions—a decision that has sparked debate and controversy over the ability to own a trademark on, well, life itself.

Personally, my main concerns about GMOs are as follows.

1) Lack of sufficient independent 3rd party testing of GMOs. We must remember that it’s the industry’s job to prove its GMOs are safe, not the public’s job to prove they are unsafe.
2) Monsanto’s horrendous track record of not being truthful or trustworthy as well as their questionable business practices. Remember this is the company that declared DDT and Agent Orange was safe.
3) Extortion of royalties from non-GMO farmers who were unable to avoid contamination.
4) If GMOs are as safe as proponents would have us believe, why has there not been any large scale clinical trials involving humans?
5) Since this technology is unproven as far as long term safety, what are we handing to future generations?
6) It is well-known that he who controls the food, controls the world. Seemingly Monsanto and companies like Monsanto are motivated only by dollar signs and control which is very dangerous!

Who Are The Main Companies Behind GMO Food?

Did You Know?
70%+ of processed foods contain genetically modified organisms.

Foods that are Currently Approved for Genetically Modification

Most developed nations do not consider GMOs to be safe except for North America. In 61 countries around the world, including Australia, Japan, and all of the countries in the European Union, there are significant restrictions or outright bans on the production and sale of GMOs. In the U.S., the government has approved GMOs based on studies conducted by the same corporations that created them and profit from their sale. Increasingly, Americans are taking matters into their own hands and choosing to opt out of the GMO experiment.

Findings now include (from Institute for Responsible Technology – www.responsibletechnology.org)

Unlike safety evaluations for drugs, there are no human clinical trials of GM foods. The only published human feeding experiment revealed that the genetic material inserted into GM soy transfers into bacteria living inside our intestines and continues to function. This means that long after we stop eating GM foods, we may still have their GM proteins produced continuously inside us. This could mean:

Presently in 2013 there is a huge concern as to why the labeling of GMO containing foods is not required in North America. Polls consistently show that a significant majority of North Americans would like to be able to tell if the food they’re purchasing contains GMOs (a 2012 Mellman Group poll found that 91% of American consumers wanted GMOs labeled). And, according to a recent CBS/New York Times poll, 53% of consumers said they would not buy food that has been genetically modified. The Non-GMO Project’s seal for verified products will, for the first time, give the public an opportunity to make an informed choice when it comes to GMOs. Personally, I believe companies who do not want to label most likely either have something to hide or do not care about their customers. However, on the other hand, many food companies are taking the initiative and voluntarily providing non-GMO labeling of their foods. I congratulate these companies for stepping-up-to-the-plate and labeling on their own free will. Consumers should have the freedom to know exactly what they are buying and eating and the choice to purchase according to their needs. If there is nothing to hide then the added expense of making new labels indicating non-GMO ingredients should be happily provided by every food company in North America. It should not be their decision or their lobbying ability to dictact whether consumers are given the freedom to know — it should always be the consumer’s right to know. And yes, consumers can certainly vote with their purchasing dollars.

More Thoughts and Information about GMOs


Click here to download “GMO Myths and Truths” – An evidence-based examination of the claims made for the safety and efficacy of genetically modified crops. This 2012 document is prepared by the preeminent researchers and scientists: Michael Antoniou, Claire Robinson, and John Fagan.

The Non-GE Shopping Guide is designed to help reclaim your right to know about the foods you are buying, and help you find and avoid GMO foods and ingredients. Download the Guide

“Because biotechnology is such a revolutionary science, and has spawned such a powerful industry, it has great potential to reshape the world around us. It is already changing agriculture and what many of us eat. Any major mistakes could lead to tragic and perhaps permanent changes in the natural world. For these reasons, future generations are likely to look back to our time and either thank us or curse us for what we do – or don’t do – about GMOs and biosafety. Doing the right thing is not simple.” CBD AND UNEP 2003

It is claimed that Americans have eaten GM foods for years with no ill effects. But these foods are unlabeled in the US and no one has monitored the consequences. With other novel foods like trans fats, it has taken decades to realize that they have caused millions of premature deaths.(1)“We are confronted with the most powerful technology the world has ever known, and it is being rapidly deployed with almost no thought whatsoever to its consequences.” — Dr Suzanne Wuerthele, US Environmental Protection Agency (EPA) toxicologist.

The big biotech firms pushing their GM foods have a terrible history of toxic contamination and public deception.(2) GM is attractive to them because it gives them patents that allow monopoly control over the world’s food supply. They have taken to harassing and intimidating farmers for the “crime” of saving patented seed or “stealing” patented genes — even if those genes got into the farmer’s fields through accidental contamination by wind or insects.(3) “Farmers are being sued for having GMOs on their property that they did not buy, do not want, will not use and cannot sell.” – Tom Wiley, North Dakota farmer.(4)

According to the NY TIMES: “A majority of our foods already contain GMOs and there’s little reason to think more isn’t on the way. It seems our “regulators” are using us and the environment as guinea pigs, rather than demanding conclusive tests. And without labeling, we have no say in the matter whatsoever.”

According to former Pro-GMO Scientist (Agriculture Canada) Dr. Thierry Vrain: “One argument I hear repeatedly is that nobody has been sick or died after a meal (or a trillion meals since 1996) of GM food. Nobody gets ill from smoking a pack of cigarette either. But it sure adds up, and we did not know that in the 1950s before we started our wave of epidemics of cancer. Except this time it is not about a bit of smoke, it’s the whole food system that is of concern. The corporate interest must be subordinated to the public interest, and the policy of substantial equivalence must be scrapped as it is clearly untrue.” 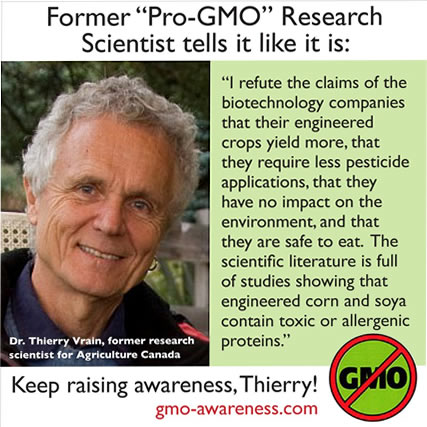 (2) See, for example, Marie-Monique Robin’s documentary film, Le Monde Selon Monsanto (The World According to Monsanto), ARTE, 2008; and the website of the NGO, Coalition Against Bayer-Dangers, www.cbgnetwork.org

Loretta Lanphier is a Naturopathic Practitioner (Traditional), Certified Clinical Nutritionist, Holistic Health Practitioner and Certified Clinical Herbalist as well as the CEO / Founder of Oasis Advanced Wellness in The Woodlands TX. She has studied and performed extensive research in health science, natural hormone balancing, anti-aging techniques, nutrition, natural medicine, weight loss, herbal remedies, non-toxic cancer support and is actively involved in researching new natural health protocols and products. A 14 year stage 3 colon cancer survivor, Loretta is able to relate to both-sides-of-the-health-coin as patient and practitioner when it comes to health and wellness. “My passion is counseling others about what it takes to keep the whole body healthy using natural and non-toxic methods.” Read Loretta’s health testimony Cancer: The Path to Healing. Loretta is Contributor and Editor of the worldwide E-newsletter Advanced Health & Wellness. Check out Oasis Advanced Wellness and our natural skin care products Oasis Serene Botanicals.