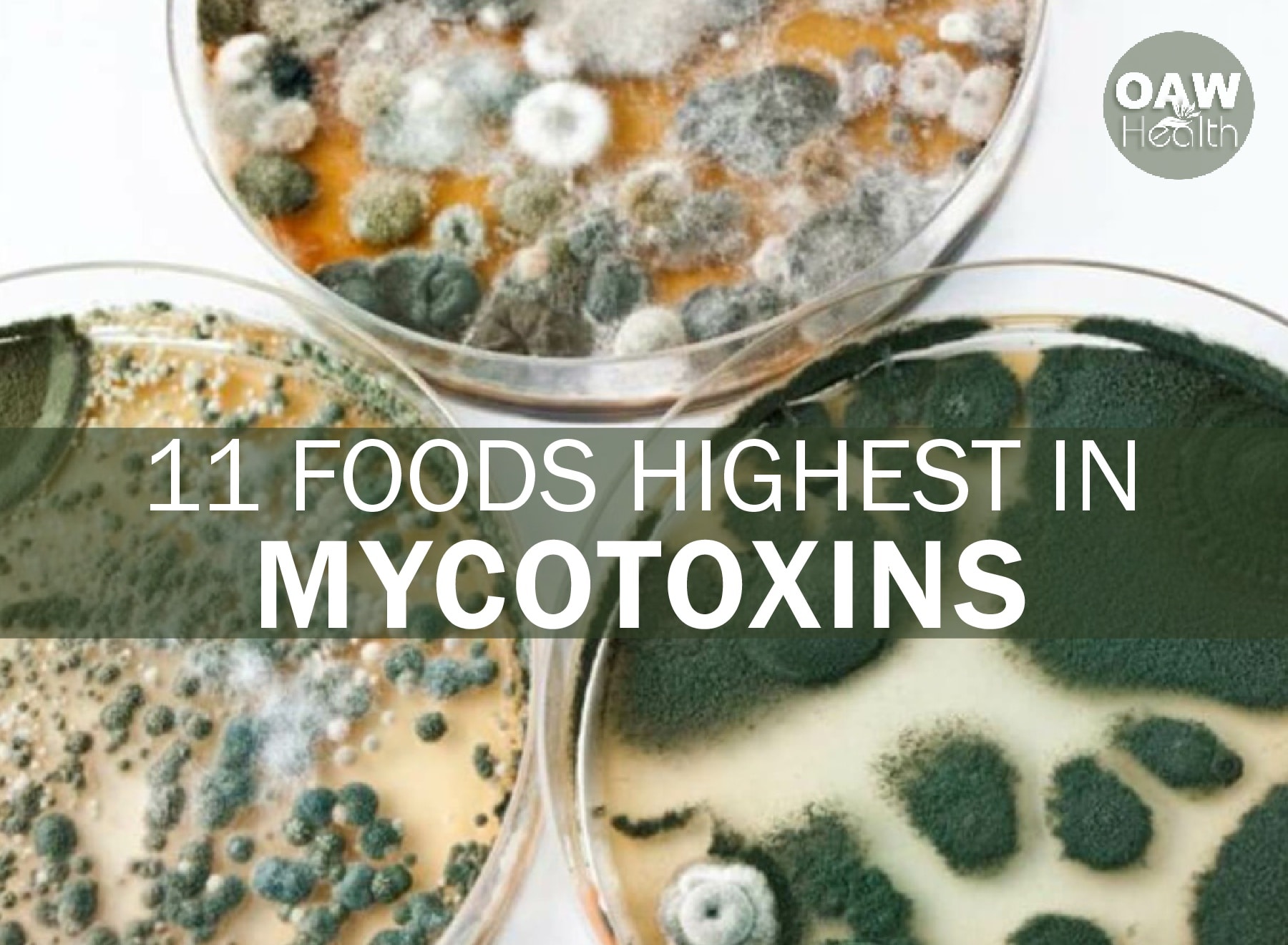 Mycotoxins are toxic secondary metabolites produced by fungus. Basically, they can be called fungal poisons. According to David Straus, PhD, a professor of microbiology and immunology at Texas Tech University Health Sciences Center, “Spores don’t release mycotoxins into the air. The mycotoxins are in the spores and are only released from the spores when they become solubilized in water.” Therefore, when occupants inhale air contaminated with elevated levels of toxigenic mold spores, the mycotoxins solubilize in body fluids. Doris Rapp, MD, explains that “the mold itself can grow in and on human tissues and cavities, such as the lungs, and the mycotoxins they produce can cause chronic systemic poisoning.” Because of their pharmacological activity, some mycotoxins or mycotoxin derivatives have found use as antibiotics, growth promotants, and other kinds of drugs; still others have been implicated as chemical warfare agents.

Mycotoxins can cause a wide range of health concerns in humans when exposed to small amounts over an extended period of time. They can be lethal if taken in large quantities over a short period of time. “Grains are sources of carbohydrates, or sugars, and as such, they risk contamination by certain fungi. These fungi produce secondary metabolites, or mycotoxins.”  In fact, if you consume grains, or grain-fed animal products, there is an excellent chance you are already being exposed because mold infestation and mycotoxin contamination affects as much as one-quarter of the global food and feed supply.The American Food and Agriculture Organization estimates that 25 percent of the food crops in the world are affected by mycotoxins.

Mycotoxins were discovered in 1962 in London, England, after a peanut ground meal was found to have caused approximately 100,000 turkey deaths. Metabolites from the common fungi Aspergillus flavus had contaminated the peanut meal. This event led to studies on mycotoxins, especially on aflatoxins, which derive from the Aspergillus species. Some of the more serious health concerns caused by aflatoxins include growth impairment, liver cancer due to DNA mutation, and a suppressed immune system.

“Mold spores will cause some trouble, but mycotoxins are like a bullet with molds as the gun. Mycotoxins are much worse.”

Dr. Andrew Campbell and the Effects of Exposure to Mycotoxins

There are numerous symptoms & conditions that have been associated with mold. (Shoemaker, 2005)

Remember that mycotoxins can send the immune system into overdrive, which leads to inflammatory conditions. Medical literature from the 1980s definitely shows a relationship between mycotoxins, molds, and health.

Questions to Ask Yourself About Possible Mold Exposure

The questions below are from a checklist developed by the Environmental Health Center-Dallas (EHCD).

Even just a few “yes” answers to the above questions, should prompt you to get serious about looking for and eliminating household or worksite molds, as well as doing whatever else is necessary to eliminate exposure.

An innovative study published in the journal The Science of Total Environment in 2011 found that the estrogen-disrupting mycotoxin known as zearalenone (ZEA), produced by the microscopic fungus Fusarium graminearum, was detectable in the urine of 78.5% of New Jersey girls sampled, and that these Zea-positive girls, aged 9 and 10 years, “tended to be shorter and less likely to have reached the onset of breast development.”

ZEA mycotoxins begin in grains such as corn, barley, oats, wheat, rice and sorghum, but can also travel up the food chain to grain-fed meat, eggs and dairy products, and are even found in beer. The researchers were able to find an association between the young girls’ urinary levels of ZEA and their intake of commonly contaminated sources such as beef and popcorn.

Derivatives of ZEA mycotoxin have been patented as oral contraceptives. According to a recent article “[zearalenone] has been widely used in the United States since 1969 to improve fattening rates in cattle by increasing growth rate and feed conversion efficiency. Evidence of human harm from this practice is provided by observations of central precocious puberty. As a result, this practice has been banned by the European Union.” Other research has confirmed the link between mycotoxins and premature puberty. 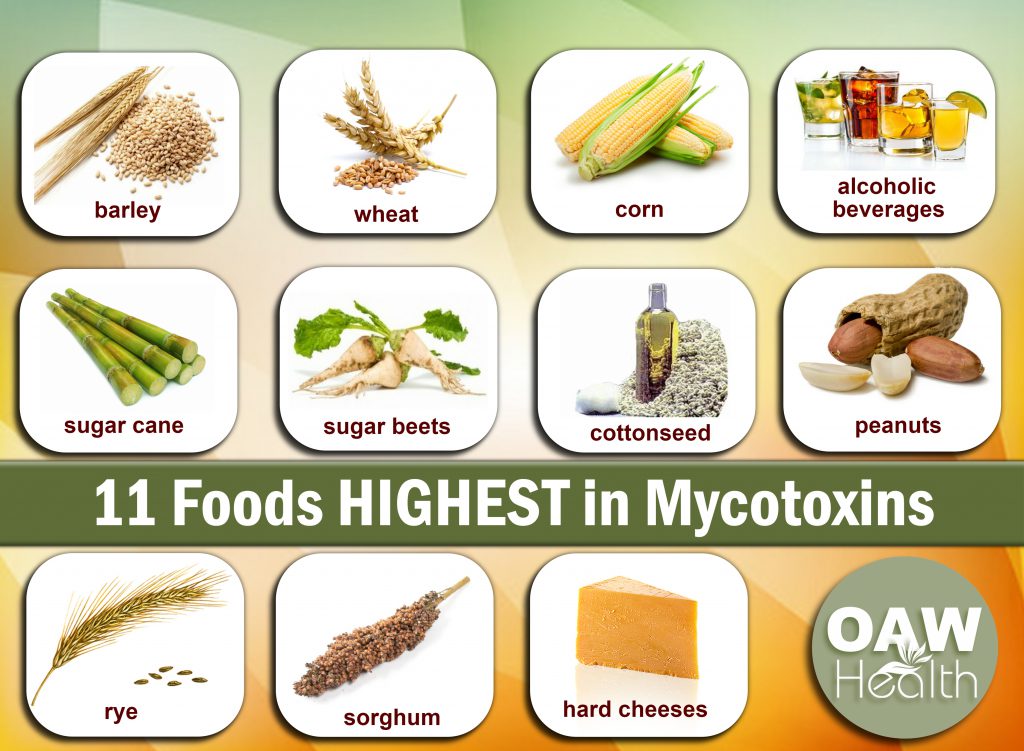 One food that is not mentioned on the list below is coconut oil. While coconut oil is an incredible food in terms of nutrition, many coconut oils contain mycotoxins. This is because they are commonly made with copras, or dried coconuts, which are often contaminated with mycotoxins. It is prudent to find a company that uses only fresh coconuts to make their oil. You’ll also notice that peanuts are on the list. Peanuts are not only commonly contaminated with aflatoxin, a carcinogenic mold, but they can also distort your omega-3:6 ratio. A much better choice is walnuts: Walnuts provide some beneficial omega-3.

Alcohol is the mycotoxin of the Saccharomyces yeast–brewer’s yeast. Other mycotoxins besides alcohol can also be introduced into these beverages through the use of mold-contaminated grains and fruits. Producers often use grains that are too contaminated with fungi and mycotoxins to be used for table foods, so the risk is higher that you are consuming more than just alcohol in your beverage (Council for Agricultural Science and technology. Mycotoxins: Economic and Health Risks. Task Force Report Number 116. CAST. Ames, IA. Nov 1989).

Not only is wheat often contaminated with mycotoxins, but so are the products made from wheat, like breads, cereals, pasta, etc. Pasta may be the least-“offensive” form of grains since certain water-soluble mycotoxins, such as deoxynivalenol (vomitoxin), are partially removed and discarded when you toss out the boiling water that you cooked the pasta in. Unfortunately, traces of the more harmful, heat-stable and fat-soluble mycotoxins, such as aflatoxin, remain in the grain. Interesting note regarding breads–most likely it doesn’t matter if it’s organic, inorganic, sprouted, blessed or not–if it came from a grain that has been stored for months in a silo, it stands the chance of being contaminated with fungi and mycotoxins. What researchers, knowledgeable doctors, and many of the toxically injured know, is that gluten intolerance is a hallmark of mold toxicity (Shoemaker, 2005)

Similar to other grains that can be damaged by drought, floods and harvesting and storage processes, barley is equally susceptible to contamination by mycotoxin-producing fungi. Barley is used in the production of various cereals and alcoholic beverages.

Not only are sugar cane and sugar beets often contaminated with fungi and their associated fungi, but they, like the other grains, fuel the growth of fungi. Fungi need carbohydrates – sugars – to thrive.

Often contaminated with fungi and they fuel the growth of fungi. Fungi need carbohydrates – sugars – to thrive.

Sorghum is used in a variety of grain-based products intended for both humans and animals. It is also used in the production of alcoholic beverages.

A 1993 study demonstrated 24 different types of fungi that colonized the inside of the peanuts used in the report (Costantini, A. Etiology and Prevention of Atherosclerosis. Fungalbionics Series.1998/99). And this was after the exterior of the peanut was sterilized! So, when you choose to eat peanuts, not only are you potentially eating these molds, but also their mycotoxins. Incidentally, in the same study the examiners found 23 different fungi on the inside of corn kernels. That said, if you choose to plant your own garden in an attempt to avoid mycotoxin contamination of corn or peanuts, it does you no good if the seed (kernel) used to plant your garden is already riddled with mold.

The same goes for rye as for wheat and other grains. In addition, when we use wheat and rye to make bread, we add two other products that compound our fungal concerns: sugar and yeast!

Cottonseed is typically found in the oil form (cottonseed oil), but is also used in the grain form for many animal foods. Many studies show that cottonseed is highly and often contaminated with mycotoxins.

If you see mold growing on/in your cheese, there’s a very good chance there’s a mycotoxin not far from the mold. It is estimated that each fungus on Earth produces up to three different mycotoxins. The total number of mycotoxins known to date numbers in the thousands. There are a few cheeses, such as Gouda cheese, that are made with yogurt-type cultures, like Lactobacillus, and not fungi (Costantini, 1998/99). Fungally speaking, these cheeses are a much healthier alternative.

Unfortunately, mold and mycotoxins can impact almost every area of your health and life. If a mold or mycotoxin issue is suspected, I highly recommend finding a knowledgeable practitioner who is experienced in confirming a diagnosis and overseeing an effective healing protocol. It can take time to totally eliminate mold, fungus, and mycotoxins. Be patient and keep your goal of getting well in the front of your mind.